I’m going to be honest, I had no idea GPS trackers for your pet even existed before an ad popped up for one while I was researching wireless fences. For once, internet advertising got it right. I recently got a new puppy and living in a semi-secluded lot in Alaska, it didn’t occur to me to contain him until I got a call from my neighbor asking if he was lost. The main reason a GPS tracker appealed to me is it would allow me to see if my little fuzz-butt was actually wandering or his excursion was a one-time deal, and I could easily find him if he did make another journey. As an added bonus, as these trackers aren’t hyper popular in Alaska yet, most would-be dog thieves would have no idea he was lo-jacked.

After switching my research session to dog GPS tags, I settled on the Whistle 3. Overall, it seemed to be the highest recommended and it uses AT&T cellphone towers, a network that exists and has decent coverage in Alaska. I’ve been using it a little over a month now and figured why not review it here on Life with Gremlins for other curious fur-baby havers. I will take this moment to disclose I have no affiliation with the folks over at Whistle. I paid for my tracker and this post was not sponsored in any way. It does, however, contain a referral links, which any Whistle customer has access to.

That bit over with the most important question to me once I got my Whistle 3 GPS tracker, was is it accurate and reliable?

How Reliable is the Whistle 3 GPS tracker?

Living in Alaska, it’s not uncommon for there to be no cell service. Heck, sitting here in my living room I have 1 bar, so a big concern for me was whether this tracker, that relies on cell towers, was going to consistently and accurately be able to find my dog. Before I even put it on him, I tested it.

I just so happened to be going on a 2-hour road trip to a nearby town, one I had taken many times before and knew had a blackout area signal wise. I mean no internet. No cell service. No radio even. I was pretty impressed to find the Whistle 3 did manage to track the vast majority of my trip, cutting out after my cell signal did even, right around the time my car radio signal went out. You can also see in the screenshot below it picked back up when the signal did, though with less consistent pinging. This was because I started a “tracking” session right as I left the “home” zone for my tracker, and I was driving when the signal came back, so I didn’t start a new tracking session. We’ll get to the difference there in just a moment. 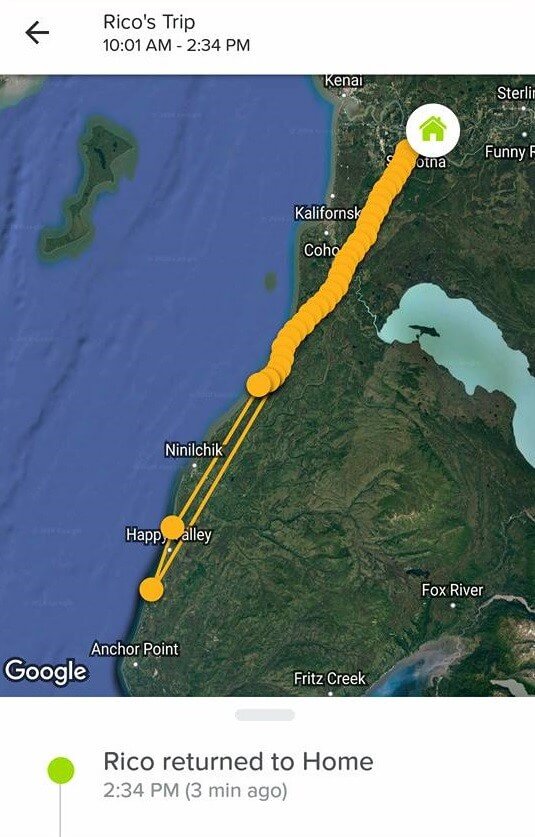 At home, where as mentioned the cell signal sucks, it has consistently alerted me when my dog has left the home zone, and tracked him outside of it. Here’s a shot from the other day where he was playing with his new dog friend (who lured him to my neighbor’s house and started this whole tracker business to begin with). 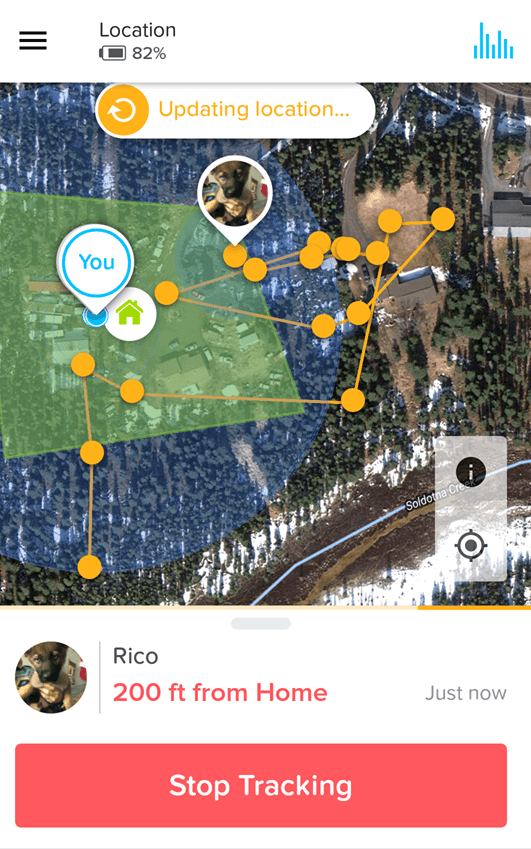 Overall, I would rate the reliability and accuracy of the Whistle 3 tracker A freakin’ plus. If it can track on the Alaskan road and in the boonies, then it will likely be accurate anywhere.

How does the Whistle 3 GPS tracker work?

After I established it worked, that’s when I really got curious about what all it did and didn’t do.

Setting up the tracker was pretty easy. It came with very clear directions. Just twist it into the charger overnight, once it’s charged, clip it on your dog’s collar. The tracking box is relatively small, about half the size of a deck of cards and similarly thick. It weighs far less than a deck of cards though. Here’s a picture of it on my 4-month-old German Shepard mix. He is about 20-25 lbs for size reference. I have seen other reviews put them on cats, so they can be used on smaller critters, though personally, I do wish the tracker was a bit smaller. 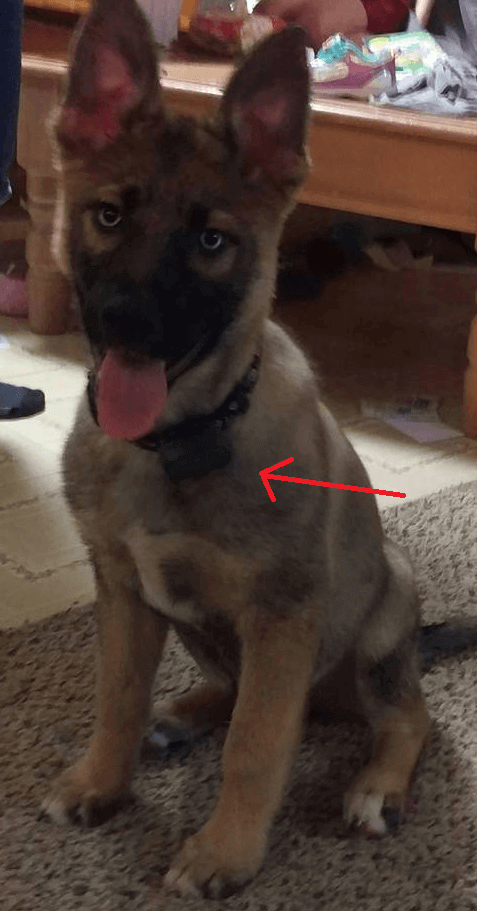 To use the tracker, you also need the Whistle 3 app. Pay attention to which you download, it does appear there different apps for the original Whistle GPS tags and the newer Whistle 3 tags which are smaller and have more features. I downloaded my app from the Google Play store for Android, but there is also an iOS version for Apple users. It’s a small app with great ease of use.

Tracking Your Pet with the Whistle 3:

Obviously the main function of this tracker is to, well, track. Once you have your app installed, you can set multiple “home” zones. These are areas you can define with a border as to where your pet should be. If your pet wanders beyond your set (and adjustable) border you’ll get a notification on your phone that your pet has left home. 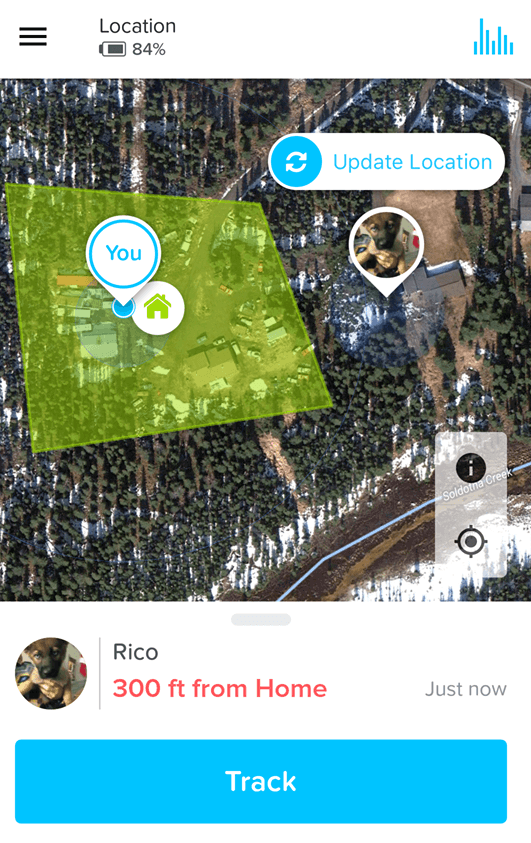 Initially, I was disappointed in how quickly that alert occurs. When I tested my tracker that first day off-dog, I found it took a little over 5 minutes to notify me I was no longer at home (though it did accurate judge how far I’d gone). Later I discovered there is a settings page on the app that allows you to edit your pet’s info, set notifications settings, and also change how often your tracker is pinged for location. I was set to 5 minutes by default. The shortest time frame it can be set to is 3 minutes.

The reason this is set to 5 by default is to preserve battery life. Though if your dog mostly chills near enough to your home to be in Wifi range, say asleep in your living room like mine, this isn’t a big concern. Your tracker will remain connected to Wifi if in range and it won’t be pinged at all. I found when my trackers location says, “at home” that means my dog is within range of my Wifi, if it says, “near home” it means he is in my set home region, but not within Wifi range. If he leaves the home border, it will say how far away he is (example/ 200 ft).

If your pet leaves the home zone, your notification of this will also ask if you want to track your pet. During a tracking session your pet’s location is updated every minute, rather than at your set rate. This is why back there in my test the beginning tracking dots are almost a solid line, but when the signal kicked back in, and I didn’t restart the tracking session, the dots are sporadic. The tracking session will also show you a neat little map of where your pet went (like in my playing dogs screenshot back there).

What else does the Whistle 3 GPS tracker do?

Notice I said main function back there. The Whistle 3 tracker also acts like a Fitbit for your pet in that it tracks activity levels. For me this was more just amusing, for example to get an email my puppy is active 136 more minutes a day than similar dogs of his age, breed, and size made me chuckle. For folks with dogs that have health issues (such as being a fatty) setting activity goals and tracking how much rest and exercise they’re getting could certainly be useful.

How good is the Whistle 3 Tracker’s battery life?

Alright, so next question, how much work is this thing to keep up with? Whistle’s FAQ states the trackers battery lasts up to 7 days, depending on how often you’re in Wifi range, how frequently you have the tracker set to update, and how often you use the track feature. My pup is in Wifi range most of the day, I have to charge mine every 8 to 10 days thus far.

The nice thing about the design on this tracker is it twists off the clip on your pet’s collar. The clip itself is a flexible plastic and it is kind of hard to get on and off (which is a good thing being a lost tracker doesn’t help you track your pet, even if you could find it easily). The tracker itself twist-clicks into place on that clip, so it’s very easy to remove and place on the charger at night when the battery gets low. The charger is USB-based, so you will need a computer, laptop, or USB plug box for charging. It does not come with one, and there is no wall plug. That I did find a little inconvenient if it’s not something you have on hand.

Finally, what does the Whistle 3 tracker cost?

It’s all well and good if something works and is easy to use, but whether or not it’s cost effective really is the deciding factor for a lot of people. Initially, the Whistle 3 is more expensive than some other trackers (be wary of Bluetooth trackers that only work if in range of your phone, they are far cheaper, but don’t work well for obvious reasons). From Amazon with Prime shipping the Whistle 3 runs $79.95. The cost is the same direct from the Whistle site though, and with the referral link I mentioned, you’ll save $20 paying $59.95 with free shipping (even to Alaska!). This tracker also requires a service for cell phone tower use, and there is a monthly fee for that. If paid monthly, the fee is $9.95 a month. If you pay an entire year at once, it’s $95.40 ($7.95 a month), and if you pay for 2 years, it’s $166.80 ($6.95 a month).

For me, the fee was worth it to find out if my dog is staying home and likewise to ensure I could get him back if taken, but honestly, if he wears it for the year I paid for and I find he doesn’t really go anywhere, there’s a good chance I’ll cancel. I’d say that will probably be the answer for most folks. If you have a dog that likes to run or live in an area where dog theft is a problem, the fee is worth it. If your dog is well contained and rarely leaves home, it may not be for you depending on your financials.