Ah, Halloween, a holiday that brings fourth thoughts of adorable children in make-shift customs, apples, candy, full moons, and pumpkins carved with smiles, but Halloween has a darker and less jovial past. The Halloween we know today is an evolution forced by religious intolerance, only showing spider-leg slivers of it’s true origins. Which is not to say it’s not a celebration, but do you know what you’re really celebrating? 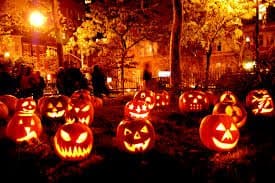 Stepping backwards, we find Halloween got her name sake during the spread of Christianity in 835 AD. A pope named Boniface the IV sought to replace the original Celtic holiday, Samhain (sah-wen), with a more church-approved alternative, because he couldn’t stop the people from celebrating and honoring the Celtic Gods. He found his placebo in All Saints’ day, also known as all hallow’s day, a day to honor dead saints and martyrs. All Hallows being the day before Halloween transformed Samhain into All Hallow’s eve which later morphed into today’s Halloween.

Samhain was a holiday celebrated by the Celts, a tribe that occupied what we would know today as Ireland, France, and the UK around 2,000 years ago. The Celts were a superstitious people who associated the cold, dark winter of their home lands with death. Being that 2,000 years ago a harsh winter did certainly mean death, this wasn’t that far fetched. They believed that Halloween, which was the day before their new year and marked the onset of winter, was a time when the space between our world and the dead’s was thinnest. So thin, in fact, that the dead visited the earth devastating crops, causing illness, and doing all matter of evil deed. This, of course, was more than likely actually the winter frosts, but nobody was about to tell the Celts that.

Samhain wasn’t all dead and evil deeds though, the Celts also believed that thin veil between worlds allowed druids and priests to make more accurate predictions about their future. Predictions that brought hope to tribes when the cold climate had taken all else. They celebrated those fortunes for three days by lighting a massive bonfire to light the dead’s way back to their world, feasted, and made sacrifices to the Gods. All the fires of the tribes except the bonfires were extinguished during the feast, then villagers dressed as animals in elaborate customs so the dead couldn’t recognize them to possess their bodies. They even fed the dead, leaving plates of food as sustenance for them around the villages. In the morning,  hearths were re-lit with embers from the central bonfire. It was believed this fire would protect the home owner, and their new future, during the winter season.

What’s that got to do with getting candy?

Nothing. It’s possible the idea of giving children candy on Halloween evolved from the leaving of food for the dead and feasts of Samhain. It’s has a few other possible origins as well, however. One story is that Fairies, who during the time of weak walls between the worlds traveled freely in towns, would pose as beggars looking for hand outs from the feast. Those who were charitable were rewarded, while those who weren’t were “tricked.” Another story states that in England during the Halloween celebration children would go door to door collecting “soul cakes” and for every soul they collected they would say a prayer for the giver’s dead loved ones.

I don’t see pumpkin’s mentioned in all that?

Pumpkins were actually originally turnips, but have you ever tried to carve a turnip into a face? Turnips were carved in reaction to an Irish ghost story called “Stingy Jack.” Jack trapped the devil in a tree and made a deal only to let him down if he promised not to take his soul to hell when he died. Well, Jack died and heaven wouldn’t have him, but the devil kept is word and turned Jack away from hell as well giving him nothing more than an ember of hell’s fires to find his way. Jack wandered the earth forever placing his ember in a carved turnip to create a lantern. The ancient Celts also placed the embers they used to light their hearth’s from the central fires into carved turnips, this is perhaps where old Jack got the idea. The Scot’s and Irish who brought the tradition to America believed they warded off evil spirits and honored the dead, but that pumpkins were easier to deal with and more plentiful.

So there you have it an answer to why is Halloween celebrated. Halloween is not a day for candy, but a day for the dead and honoring them. A feast, a fire, and family are more appropriate for the occasion, (No one said treats had no place in a feast) and let’s just leave the pumpkin’s to Jack.

Now that you are no longer wondering why is Halloween celebrated you may also enjoy:

Candy for Kids: How Much Is Too Much?