“If you keep making that face, it will stick like that!” I have no idea who told my kids this, but someone did, and so they asked me if it was a true. I said doubtfully, “I really don’t think so hun, it’s just rude to make faces.” We then had a conversation about people’s feelings as well as why sometimes people say things that aren’t true. In the end though, he still wanted me to check, just to make sure you know, that I was right and your face really won’t stick a certain way if you make a face too long. 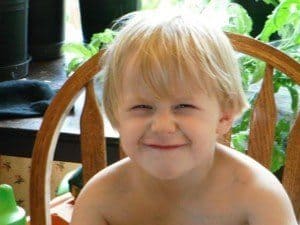 Nope. There is no logical support for the claim that making a face too long will result in it “sticking.” This one just arose out of younger kids making rude faces, and their parents taking the easy route out with scare tactics. While some medical conditions can cause face paralysis or muscle contraction, these sort of conditions don’t arise from simply making a silly face.

This also applies to crossing your eyes. Prolonged eye crossing can cause muscle strain, as this just isn’t something your eyes are used to doing, but sore muscles don’t just stick for being sore.

…but wait… expressions can change your face, sort of.

Making the same expression a lot—and I mean a whole lot—can actually have an effect on the look of your face over time. For example, if you raise your eyebrows all the time, the muscle controlling that eye will become more toned, so to speak. Underlying musculature changes can make your face look slightly— albeit likely not horribly noticeably—different. You may also develop habit expressions that your face just sort of goes into, but they are usually things like a smirk or the before-mentioned eyebrow raise.

As you age, frequent use of the same expression will also determine where your wrinkles and lines are. For instance, folks who just can’t stop smiling often get crow’s feet and smile lines around their mouths and people who have sensitive eyes often get creases in the middle of their forehead from squinting.

Of course, as all of the above is far from an instant reaction, most young kids making silly faces have no reason to worry beyond being thought impolite. So, now you know, your face won’t in fact stick that way.