23andme now offers two different DNA testing “levels,” so to speak. You can get just the basic DNA test that comes with genetic heritage reports, DNA matches, and more for $99 or you can get the basic test plus health related genetic reports for $199. That might leave a lot of you wondering if those genetic health reports are really worth more than double the price. So, let’s take a good look at what you get with each testing option so you can decide for yourself. You can also read a comparison of 23andme’s basic testing level and AncestryDNA’s test right here.

What do you get with the basic 23andme testing level?

Not to be confused with your genealogical heritage, genetic heritage will tell you where your actual genes came from. Confused? Genealogical heritage refers to where the actual people in your family tree were from. (IE, Grandma was from Norway.) Genetic heritage refers to where the DNA you actually have came from. I often tell people to think of their genes like a bag of dice composed of all of their ancestor’s genes (Grandma included). Which of those genes makes up you really depends on a roll of those dice meaning where those genes originated from geologically may also vary from where your recent ancestors were from.

The test will not separate “and” categories. For example, you will get one percentage for “French and German” not one for French and one for German, but these primary regions can be viewed in more detail as a match strength your genes showed to sample sources from individual countries, such as “France” and “Germany.” This strength is not given as a percentage. Below is my full report from this more in-depth section, you reach this report on your results by clicking “See all tested populations.” I’ve included all the regions, even those I had no match for, so that you can see the entire 151 country list. Alternately, here is 23andme’s help page listing their reference populations.

This also gives you a better idea what each region includes. Many are confused by the “Native American” region in particular. Most think of Native American as the tribes we’ve come to know today in North America such as Cherokee or Blackfoot, but 23andme is using data samples from mostly South American countries (which are still native to the Americas). This is because, in 23andme’s own words, “In North America, Native American ancestry tends to be five or more generations back, so that little DNA evidence of this heritage remains.”

Your report will show in a single scroll-able page, the one shown here was created in paint from multiple screenshots for a better page fit on the page (sorry mobile users). The more dots a country has the higher likelihood that you had ancestors from the location. For example, 48.2% of my DNA is “British & Irish” with a strong chance that many of those ancestors were from the United Kingdom rather than Ireland. As you can see, not all percentage regions are able to be broken down into a likely country of origin. In my sample here, 12.8% of my DNA is “French & German,” but 23andme was unable to determine which country that percentage was probably from. 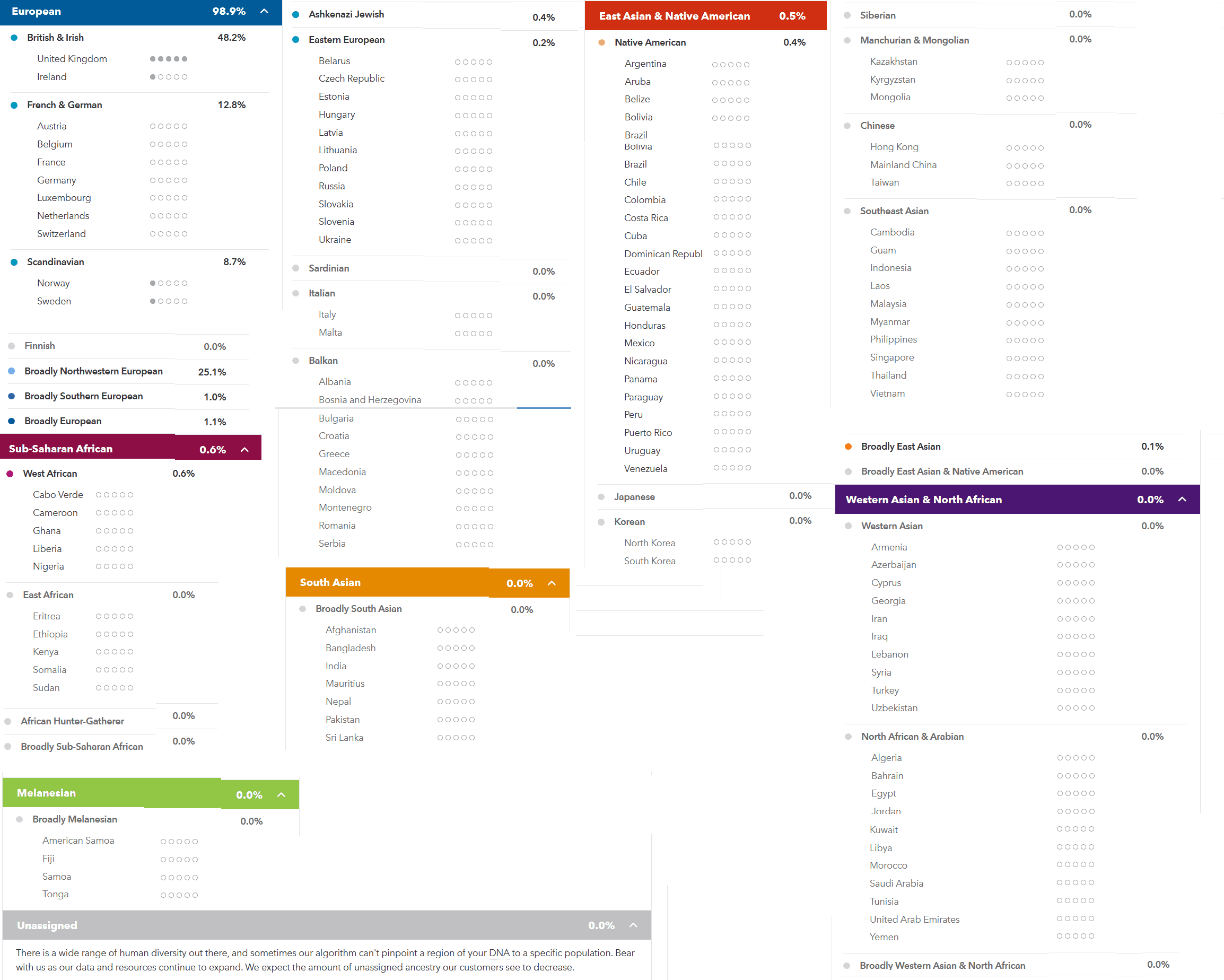 You can also view your results at 5 different levels: 90, 80 or 70 percent conservative or 50 percent speculative. Each of these levels guesses to some degree based on regional samples where segments of your DNA originated and then builds a percentage of your full genome from each area. The default report (pictured above) is set at 50%. To view other settings, visit the main ancestry composition page (the one you clicked “See all tested populations” on) and scroll down until you see, “Your Ancestry Composition Chromosome Painting,” then click, “Change confidence level.”

This report is only given for the 31 sample regions, not the full 151 country report.. At the bottom of the detailed 151 country report page there is a confidence level selection drop box, but that only affects your raw DNA data file. The first image below is a comparison of the raw DNA files that are used to build the chromosome painting at 50% vs 90%.

I did not include the entire report, because there are 144 cells (the reports are in Excel) and that would make for a very long image, but you get the idea. I included the file names, because the “.5” or “.9” in this case are how you can tell what the report was set at. 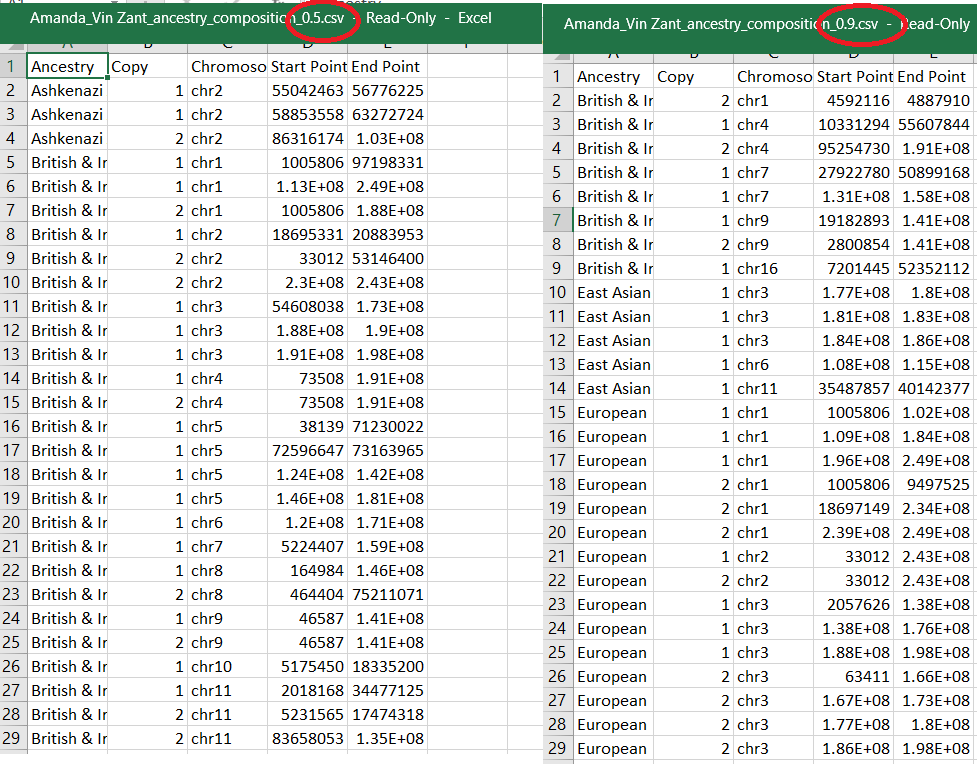 These images below, on the other hand, are my actual results for 90 percent conservative and 50 percent speculative on the chromosome painting page (I know, it is annoying they are not in the same place). As you can see, the more conservative the guess, the more “broadly” percentages you will get. While the more “speculative” guess will assign higher percentages to actual regions. 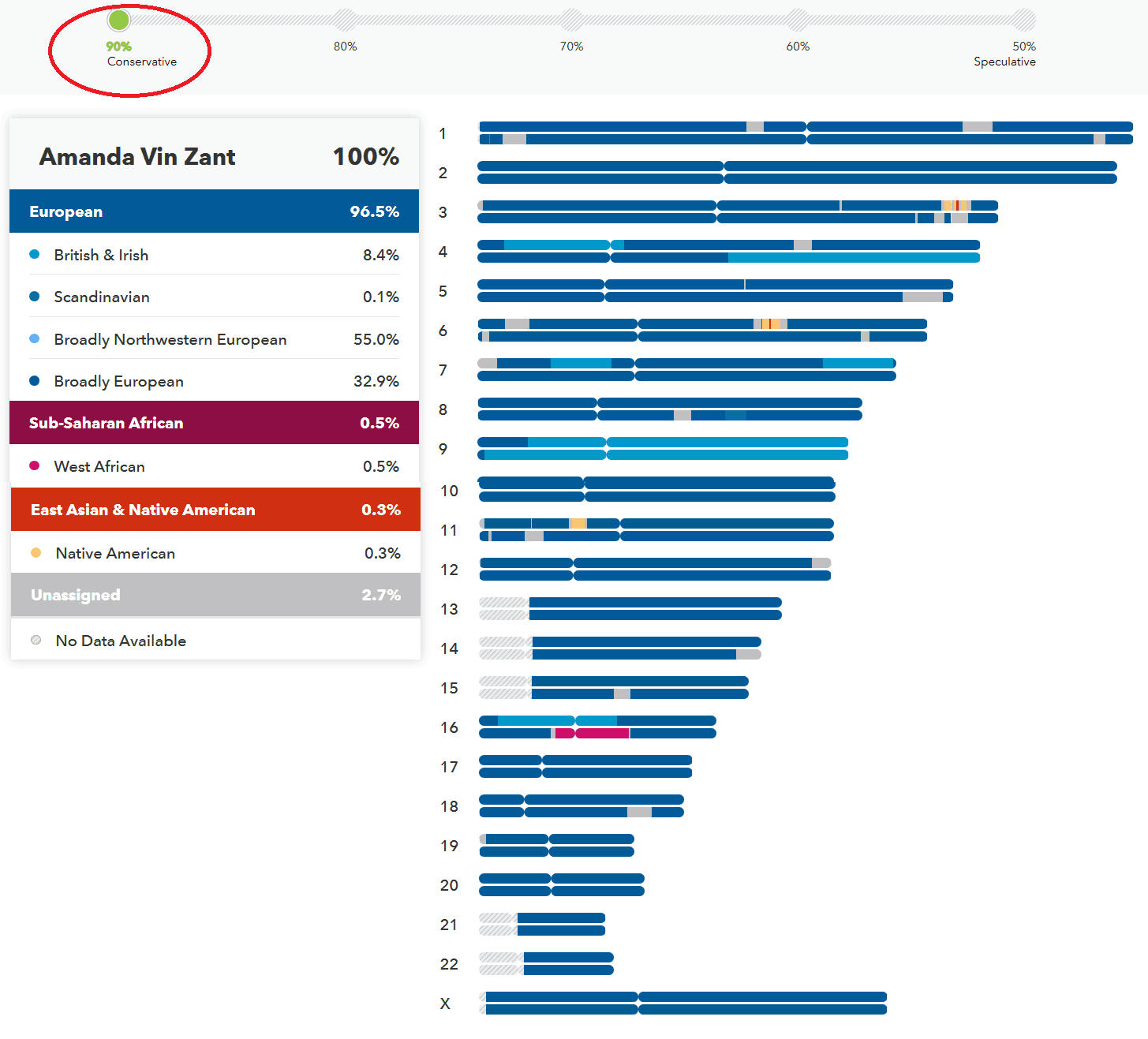 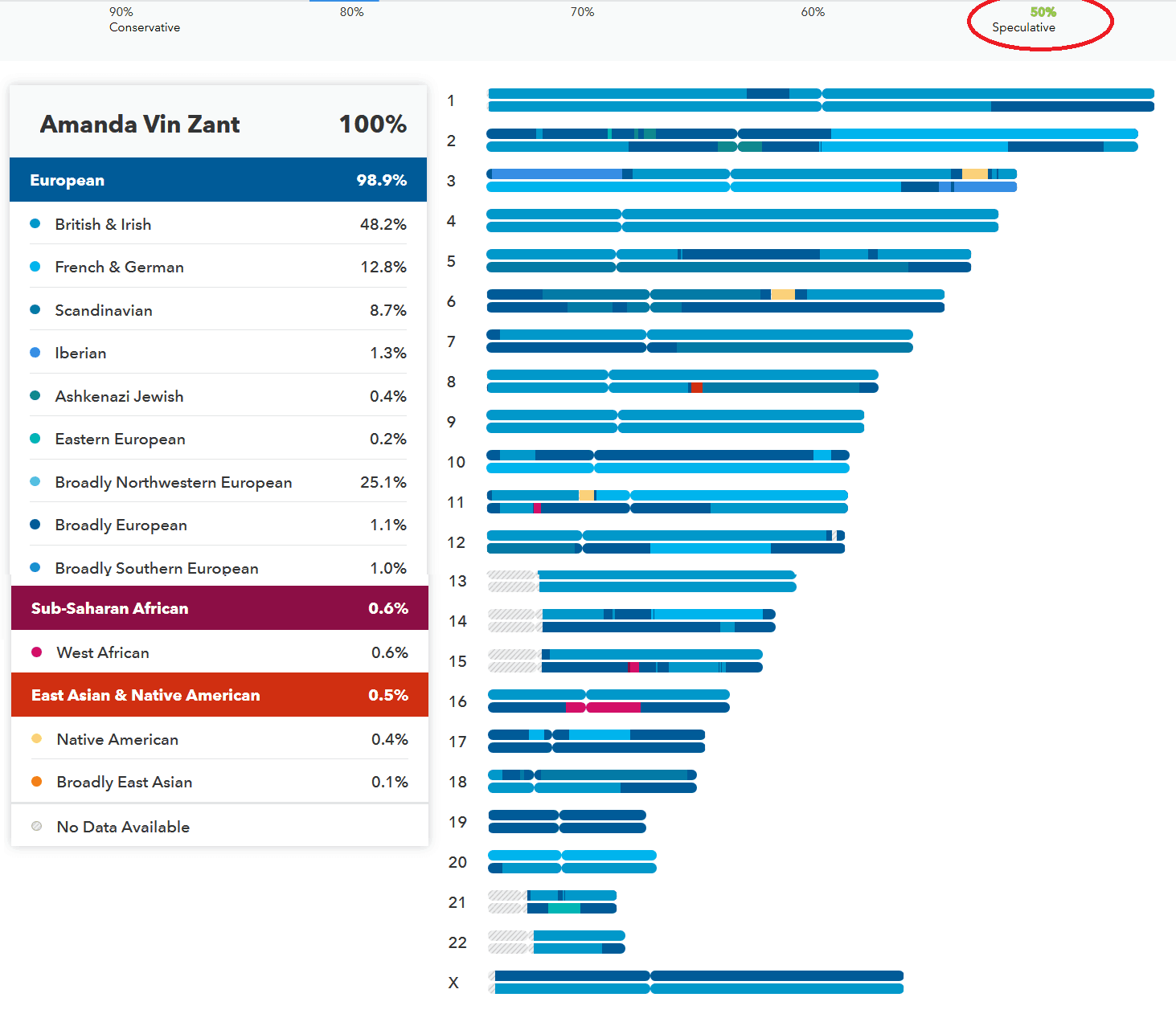 If your parents test on 23andme, your composition will also update based on their results, you can read more on this process here. A comparison of how my results changed when my mother tested are shown below. The visual differences in the report are because the without-parent results are from before 23andme updated and redesigned their site appearance. 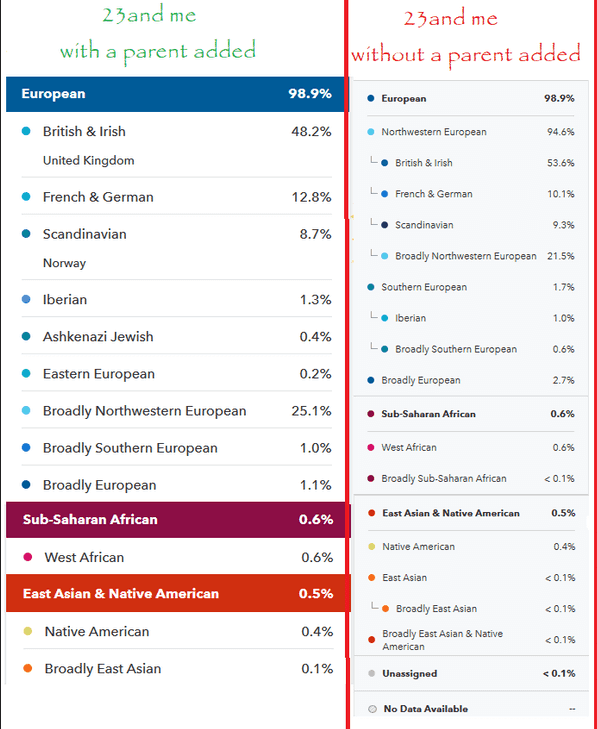 When viewing your matches you can also compare your DNA side-by-side to your parent, and if one parent has tested but the other hasn’t, a guess will be shown for the second parent’s genetic ancestry (since you get 50% of your DNA from each parent). 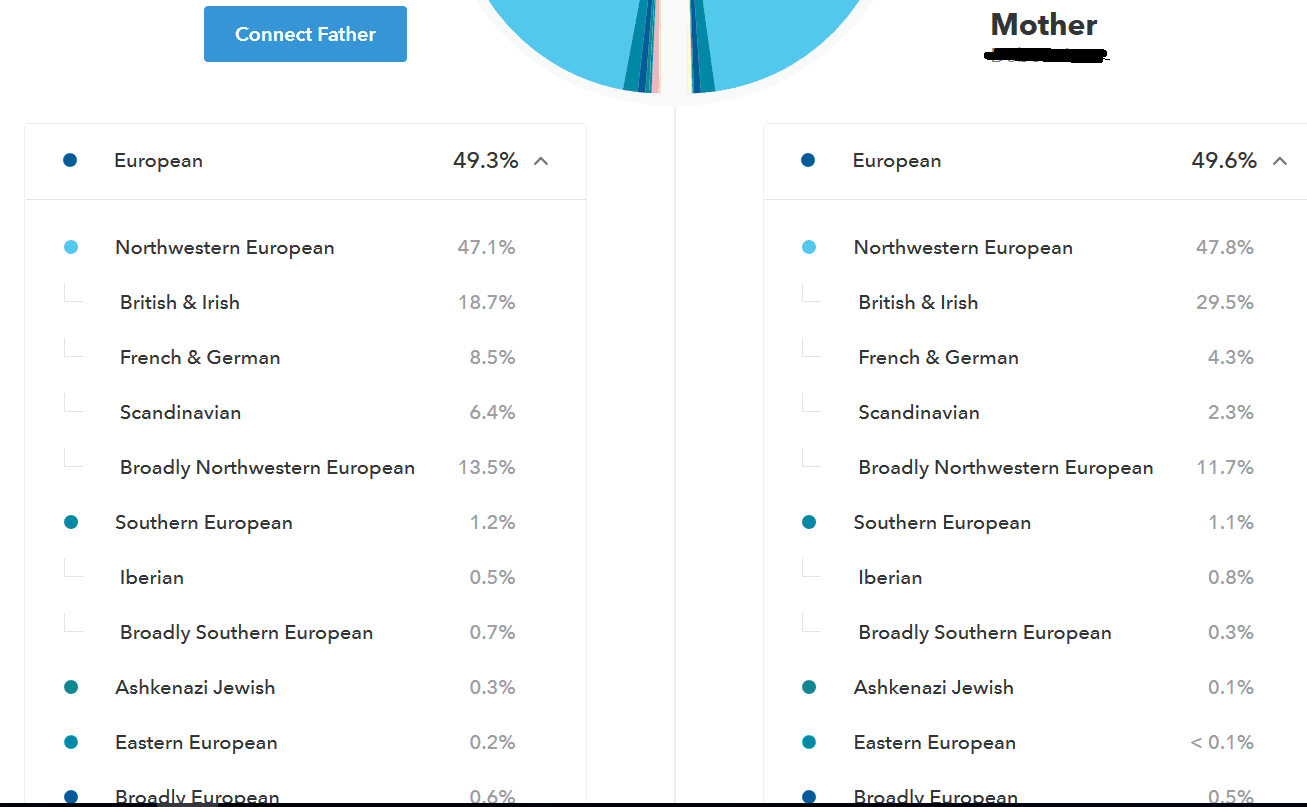 Also included on the ancestry composition page is your ancestry timeline. It shows where within your ancestry certain genes were likely to have come from. You can hover over each bar and a pop up will elaborate. As seen below.

Moving on to the next report, haplogroups. Everyone gets their maternal haplogroup, males will additionally be given their paternal haplogroup. Haplogroups are groups of genes that are believed to be common to a particular genetic ancestor. This in theory would reveal where the very first person in your genetic line originated from– the birth of your gene line both maternal and paternal. Below are my maternal results. To get my paternal results, my father or brother would need to test. As an added well-that’s-nifty throw in you’re also shown a common ancestor who shares your haplogroup. I got Marie Antoinette! 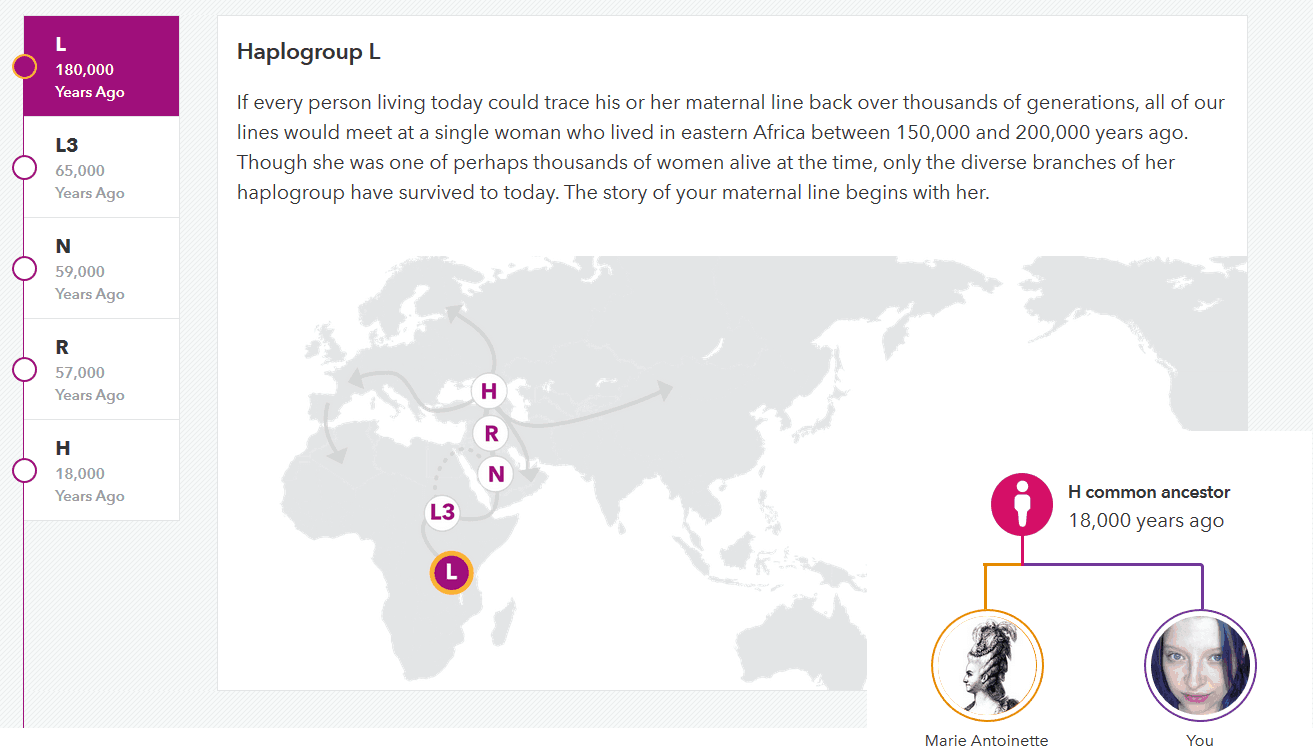 The final genetic heritage section is neanderthal DNA. Here you are told how many of your genes are neanderthal variants. To gauge how high or low this number is you’re also told how much of your DNA is neanderthal and how this compares to other 23andme testers. 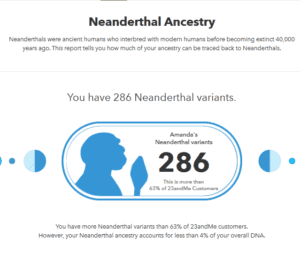 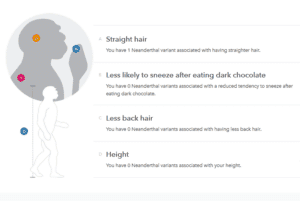 The other primary component of the basic 23andme DNA test is DNA relatives. This section compares your DNA to all other testers and then provides you matches. Each match lists a probable relation (example, second cousin) as well as the amount of DNA shared. 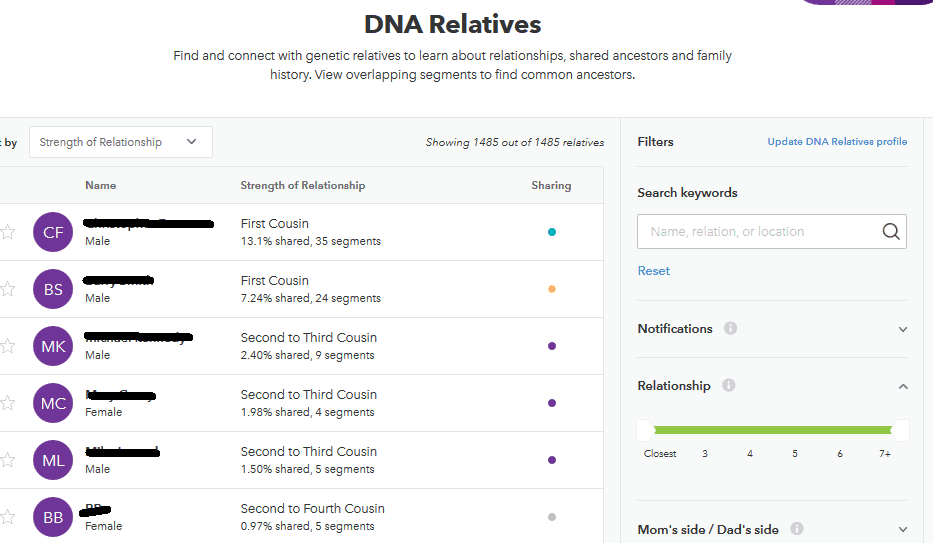 These matches can be searched or sorted by relationship, mom or dad’s side (if your parents have tested), the number of grandparents a match has with the same birthplace, and surname. The surname field also gives a count for each name ranking them from highest to lowest. This is quite helpful to quickly spot likely genetic lines.

When clicking into a match you are given more detail, including common surnames, locations of common ancestors (such as, say, you both said your grandma was from Norway), haplogroups, and genetic heritage. How much is shown depends on how much you and the match have elected to share. This screen also allows you to contact your matches or choose to share more information. Unlike AncestryDNA’s match screen, 23andme regrettably lacks family tree matches.

Ok, now what do you get with the genetic health reports upgrade?

When ordering the $199 test from 23andme, you receive all of the above along with genetic health reports. These reports check for genes known to increase chances for certain conditions or traits. Please keep in mind that having the genetic predisposition for something doesn’t promise it will present itself. For example, my health reports gave me a high chance of being lactose intolerant. I’m not. There are 41 health condition carrier reports, 19 traits reports, and 7 wellness reports. Below is a full list of carrier reports. 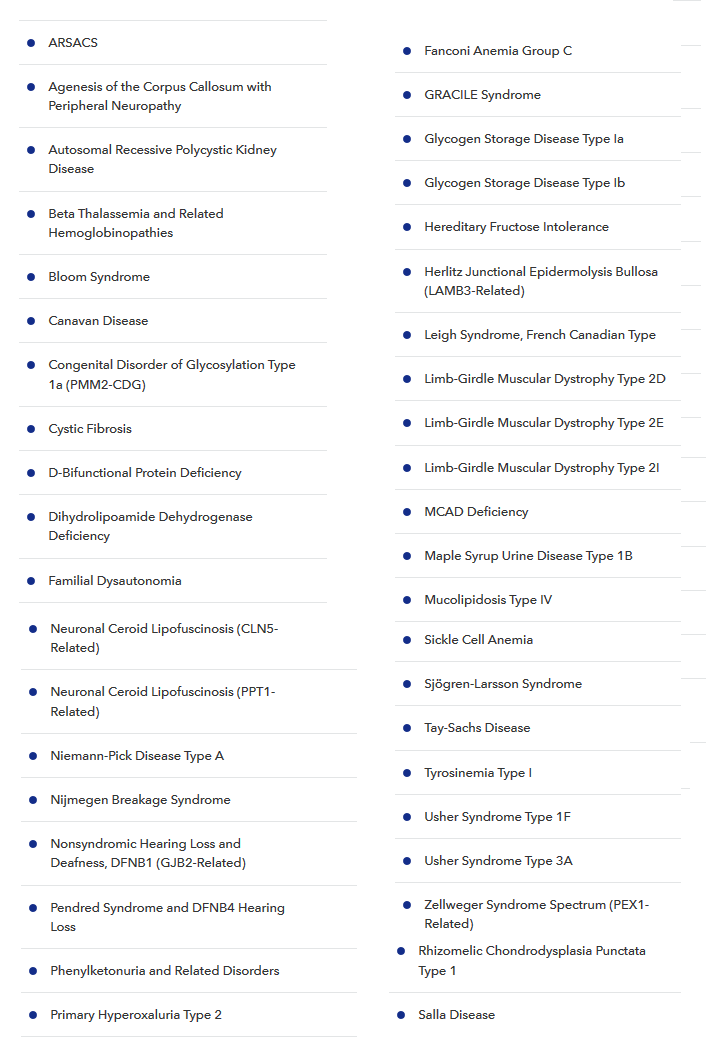 Traits reports measure your chances of having certain physical traits. These aren’t super vital to most people, as, well, we have eye balls and mirrors, but it is cool to see how much is actually a result of your genes. Trait reports include:

Each report gives more detail on your likelihood of having each trait and how that compares to other users of a similar background. 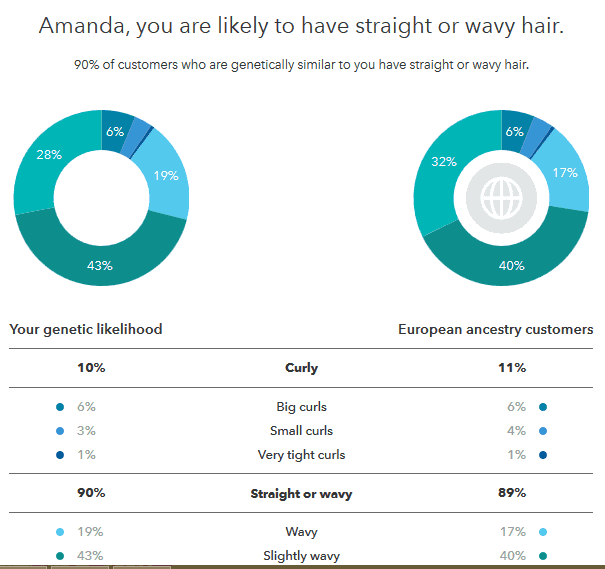 Wellness reports on the other hand look at lifestyle and health-related traits, such as the before mentioned lactose intolerance, as well as alcohol flush reaction, caffeine consumption, deep sleep, sleep movement, muscle composition, saturated fat, and weight.

As of 2019, you can also connect your results to the Lark Health Coach app to receive diet and exercise advice based on your genetics. The free version of this app is limited and only includes sleep and activity tracking via your phone’s sensors (you may not link wearable devices such as Fitbit unless they will tie into your phone’s default program). There are also two more comprehensive programs that run $19.99 a month– the Wellness program which includes diet, exercise, sleep, and activity tracking, and the Diabetes prevention program, which may be covered by your insurance. I did not subscribe to this service and can’t offer a user review as a result, but it could potentially be a perk for someone choosing 23andme.

Are the genetic health reports worth the money?

Sadly, 23andme must not realize you can pay for the standard test, download your raw DNA, and get health reports for $12 from Promethease. Worse, the Promethease report is far more detailed albeit more complicated and not FDA approved. What little 23andme told me matched what was in my Promethease report (23andme actually contributes to the database Promethease uses), but the Promethease report had thousands of matches (over 22,000). Below are a few screen cuts from my report back in 2015, as you can see, they flagged genes for all sorts of stuff. 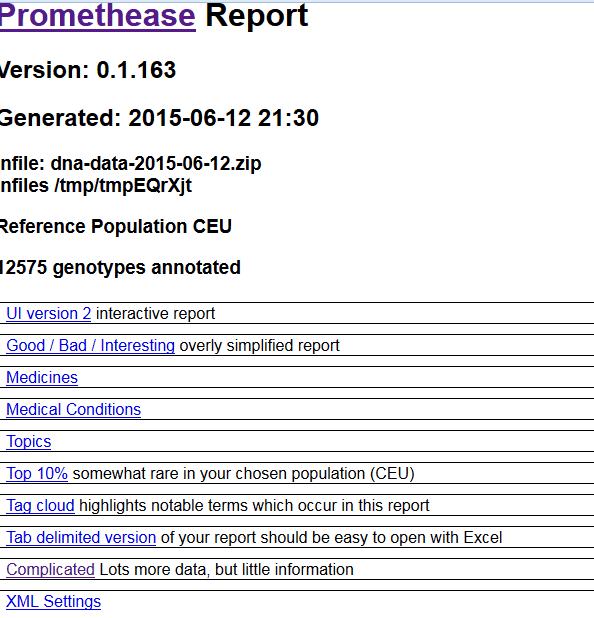 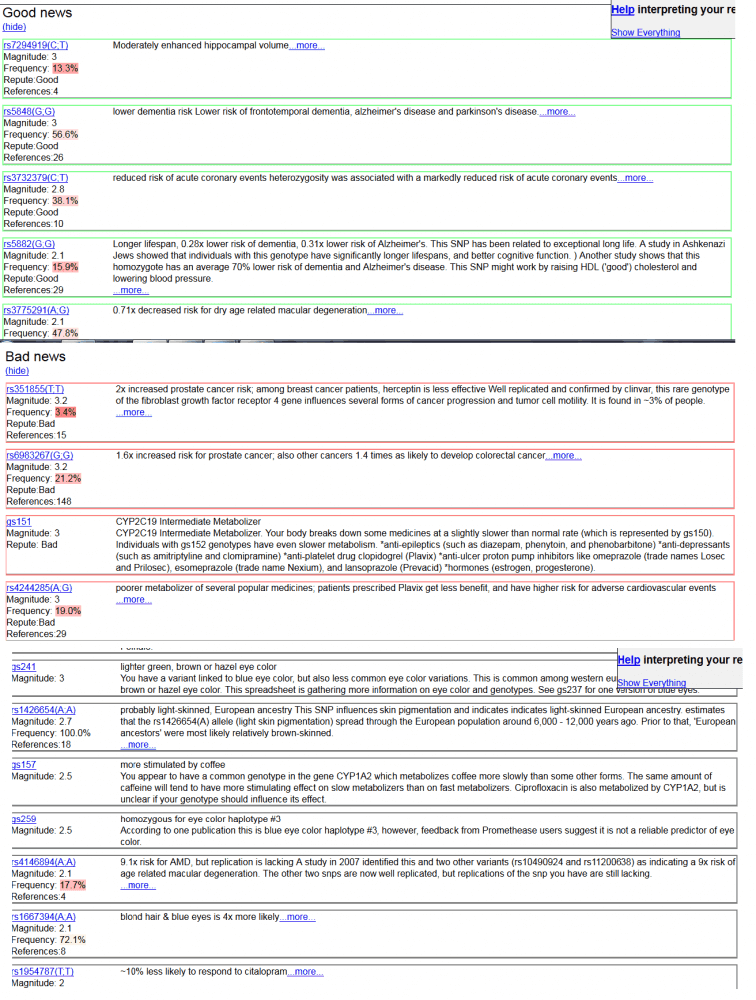 Even the updated Neanderthal info was on Promethease, but more genes were flagged.

Promethease also redesigned their reports sometime between my original running in 2015 and now, so I paid again just to review their “prettier” report for you (results do not stay online forever, but can be downloaded). You can read our in-depth Promethease review here.

Remember that at 23andme every additional test you purchase is 10% off and shipping is combined, so you could save by finding others who would like to test and do a group order. 23andme is also now on Amazon Prime (basic test and genetics health reports version). If you want just one test, you can save on shipping this way.

I do hope this has helped you reach a decision between the $99 23andme DNA test and the $199 23andme genetic health reports test. If you have any questions or would like to see something added to this 23andme DNA test review and comparison, please let me know.