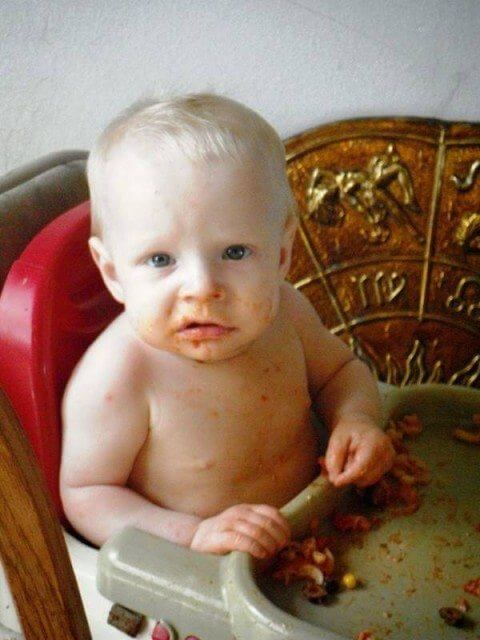 You’ve trudged through breast milk and baby cereal, and that tongue reflex is gone, gone, gone. Now you’re just dying to watch peas, carrots, and sweet potatoes splash your high chair’s white glory, but wait, there are some foods to avoid for babies in the first year. What foods are they and why? I’m getting to that.

First, what should you generally debut with? Why not add a little of what your baby can eat before going into foods to avoid for babies.

Vegetables.
I know, baby vegetables look, and taste, if you give them a try, pretty not great. Vegetables just don’t make very great baby food, so why start with the green stuff? Babies who are started on non-sweet vegetables like peas or green beans are more likely to eat them later in life. Why? Because they don’t become hooked on sweets before they learn the enjoyment of a good veggie.

After veggies come fruits, and then proteins.

And on to foods to avoid for babies…

Foods should generally be introduced one at a time and about a week apart so that if your baby does have an allergy, you know and stop feeding them that food. Food allergies even sometimes present very mildly as rashes or diarrhea. As a rule of thumb, if your baby has an adverse reaction, even small, after the same food three times they are likely allergic or at the least sensitive to that food.

No Honey:
Honey is safe for fully-developed adult intestines, but babies can contract spores of Clostridium botulinum that cause bacteria growth which can lead to infant botulism. Botulism can be fatal.

Avoid Peanut Butter:
Peanuts are a high allergy risk, on top of that the sticky yummy substance is nigh impossible for young babies to swallow. Peanut butter is fine for older babies, but avoid it until your baby is a big-people-food eating pro. The same goes with other soft sticky foods. Nuts in general should also be avoided due to high allergy risk and choking hazards. My oldest ended up with a nut allergy despite no family history. You never know.

Avoid Salt/Sugar- in excess:
Granted salt and sugar are in most everything, but try to avoid adding salt and sugar to your baby’s diet. Salt and excess sugar has been linked to diabetes later in life, and is hard on baby kidneys.

No Cow/Soy/Rice Milk:
These milks can’t be properly digested by babies under one year of age due to their still developing digestive system. It won’t give proper nutrition and can be harmful to your baby’s kidneys.

Avoid Itty Bitties:
Anything tiny that could be choked on should be left to the experienced eater as well, unless it’s dissolvable. Gerber makes these wonderful tiny stars that dissolve when eaten. They can still be a choking hazard so should be reserved until around 8 months, but man do kids love grabbing at them.

Slow Starters: foods that when introduced slowly can be safe.

Spinach, Cabbage, Beets, Turnips, Broccoli, Carrots:
In early eaters, these foods can cause Blue Baby Disease (methemoglobinemia) due to being high in nitrates. They are fine for babies over 4 months of age, but spinach and beets in particular should be fed in moderation until year one. On that matter, starting solid foods is not generally recommended until 4 months of age anyhow.

Wheat:
Starting wheat to quickly can cause celiac disease, or an inability to process gluten properly, this disease does have a genetic predisposition.

Avoid Citrus, Spices and Acidic Foods:
all of the above can cause wicked diaper rash and upset tummies, introducing them slowly and later in your baby’s food time line is recommended.

So there you have it, a few foods to avoid for babies less than one year old, a few to start slow and watch, and a plethora that are safe to splatter, err I mean eat. Get that baby a spoon!