Pretty much every toddler I’ve ever known has at some point locked themselves or at the least their parents keys in a car. My 2-year-old son did it most recently just last week. He was playing outside and got in our Volkswagen to “drive,” and before he was busted and ousted, he locked the doors. This was the wonderful moment we found out for some odd reason our outer door locks no longer work so our keys were useless, the power windows and locks don’t work unless the car is on, and the pull latches used to unlock the doors manually are so stiff I can barely use them. I’ll admit being it was a sunny day for Alaska and that the car has a black interior, thoughts of watching helplessly while he cooked in the car to the point of heatstroke started to cross my mind–well, quickly replaced by the price to replace a car window when I’d break it rather than watch my son cook. Luckily, we managed to pry the window open enough to unlock the doors, but if you find yourself in a similar situation, here are some options to get into a locked car to get  a toddler out. 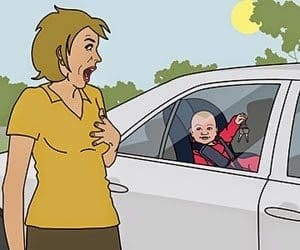 This is more a preemptive step suggestion. While I know making duplicates of today’s electronic keys can be expensive, I’ve found a $1.99 duplicate from a department store may set off the alarm when used and won’t often work to start and drive the vehicle, but it will open the door. This can be an inexpensive way to have my-kid-locked-the-door back-ups, plus if these spares are lost, they don’t actually work to drive the car in most cases.

Many vehicles have a fold down back seat that leads into the trunk. If your trunk isn’t locked, you can then enter the vehicle through the trunk. Make yourself familiar with the release latch on the backs of your seats. If there isn’t one, you can usually force the seat forward with minimal damage. This can be handy because many instant door lock buttons exclude the trunk.

3. Try the windows and doors

If you don’t have a spare and the trunk is locked, begin checking to see if the doors are closed firmly. Toddlers tend to sort of half shut doors, where they latch but will open slightly when pulled on. You may also be able to force a window down slightly or pull it out enough to insert something long and thin. Coat hangers work well, but I’ve actually used a stick to get into a locked car in a pinch. Basically, try to get something inside to press the unlock button or roll down a window. As in our case though, this may not work with a vehicle that isn’t running and has electronic windows/door locks. We had success pulling the door open enough to fit a pair of needle nose pliers through to pull the manual door lock lever up. Be creative. Car windows are expensive.

I have had luck in the past coaching toddlers to open doors themselves in one way or another, or roll down windows. It never hurts to try even if you have to resort to bribery. Remember to keep things simple and give one direction at a time. Try not to seem angry or offer a strong reaction, as your toddler will likely enjoy teasing you from the other side of the glass.

Finally, most local cab and tow companies offer an unlock service for a moderate fee. Here in Alaska, it’s $25. Keep in mind that pre-’90s vehicles are far easier to break into. The newer your car, the harder the task of getting in will be. If you don’t have any money, the police will also open your car doors. Be sure to let them know there is a child locked in the vehicle — it will dramatically alter their response time.

Your last resort is to break a window; opting for the least expensive option is recommended. Smaller windows without in-glass defrosters are usually your best bet.