While it’s arguably a waste of tests, many women continue to use LH test strips (OPKs or ovulation prediction kits) after ovulation. Many of those same women then find themselves with a positive test just before their period or aunt flow (AF) in TTC-speak. Some assume this means they’re pregnant, as LH strips can pick up hCG, the hormone detected by pregnancy tests. Others are confused and wondering if they’re experiencing double ovulation or failed to ovulate earlier in their cycle. Either way, the situation leads many to ask the Google gods, “LH surge before period” or “LH surge before AF.” So, which is it? Pregnancy or ovulation?

What is LH, and what does it do?

LH is an abbreviation for luteinizing hormone. Produced by the pituitary gland, it works to mature follicles for ovulation and then subsequently triggers ovulation via a “surge.” This is why LH test strips can be used to reliably predict ovulation within 24 to 36 hours.

LH is always present in your cycle. As a result, LH test strips will almost always show two lines and are only positive if the test line is as dark or darker than the control line.

Why can LH surge before a period?

Progesterone also suppresses LH to prevent ovulation while the body is waiting, so to speak, to see if it becomes pregnant. As a drop in progesterone is what triggers your period to begin, often when progesterone drops, LH briefly sees an upturn as well. Depending on your personal hormone balance, that uptick may be significant enough to show a positive OPK or at the least a darker line than was seen in the pattern on previous days.

This is also supported by the standard ranges (in menstruating women) for “normal” LH, which are:

Notice that the luteal phase range peaks out at 16.9. Most of the stick-type OPKs have a sensitivity of around 20 to 25 miU/mL. Because OPKs of that variety always show a second line for most ladies, levels potentially so close to 20 in the luteal phase can easily cause a positive LH test. The digital smiley version would be harder to misread or see a false positive, as they tend to have a higher threshold (closer to 40 miU/mL).

It should also be kept in mind that your hormone levels do fluctuate from cycle to cycle. This means seeing an LH surge before your period when you haven’t previously doesn’t necessarily mean anything.

Can you have an LH surge before your period and still be pregnant?

Following that logic, you might think that an LH surge being a sign your progesterone has dropped indicates your period is incoming, and the month is a wash conception wise. In most cases, that, unfortunately, is likely true, but it is possible to get an LH surge before your period and still be pregnant.

Sometimes when implantation occurs late in your cycle, progesterone levels can begin to fall and then rebound. In this instance, spotting or light bleeding may also occur. In other cases, implantation itself causes a slight hormone dip (visible by a temperature dip as well), which would likewise allow for a slight LH rise.

Can I use an ovulation test to detect pregnancy? OPK as HPT?

Finally, while an OPK can react to hCG, it takes a higher level of hCG to produce a positive result. This means that a pregnancy test would show positive long before an OPK in most cases.

Researchers from the Division of Laboratory and Genomic Medicine at the Washington University School of Medicine tested three major brand LH detection kits: First Response, Clear Blue, and Walgreens. All were digital test kits. Below were their results. As you can see, all three tests did pick up hCG. Clearblue and Walgreen’s digital LH kits were both able to detect hCG once it hit 100 mIU/mL. In comparison, First Response’s early result HPT can pick up levels as low as 5.5, and most other pregnancy tests are around 25. Unfortunately, this study did not cover LH strip tests. In any case, you’re probably better off using a test that was designed to detect pregnancy over one that wasn’t. 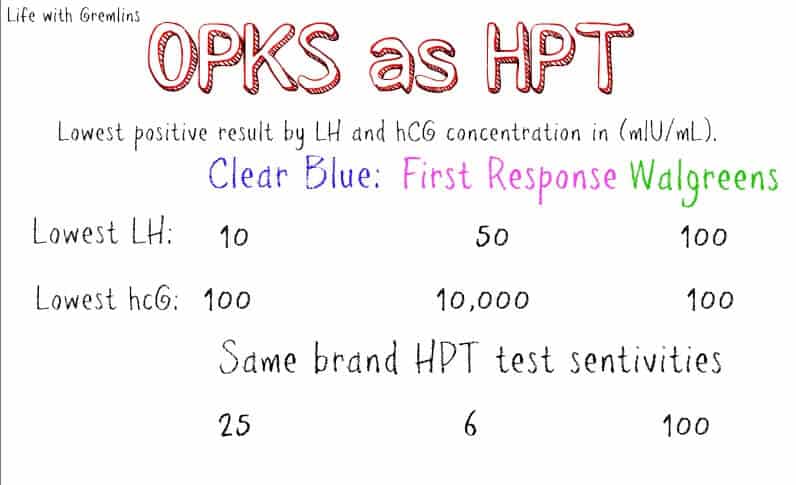 We hope this has cleared up some of your questions, but if you have more, feel free to drop us a comment.