The effects of Xylitol, a natural sweetener often made from birch bark, on oral health are well documented. A mere 6 to 10 grams daily is enough to reduce bacteria levels, hinder plaque formation, help prevent cavities, and even aid in remineralization of existing damage. Even better, it poses no health risk beyond the chance of digestive upset with heavy use. It’s pretty awesome stuff. In older kids and adults, adding Xylitol to your dental routine is pretty easy too. It’s widely available in chew gum and mints. What about toddlers though? Nearly 30 percent of all children under 5 have dental caries (another term for cavities), yet for some reason there are no over-the-counter Xylitol products beyond toothpaste aimed at toddler use. Unfortunately, the issue with Xylitol tooth paste is it would be very difficult to get the recommended dosage in kids (a minimum of 6 g) using this method at .3 g or so per brushing.

Ideal Characteristics of Xylitol for Toddlers:

The first step I took in trying to find the best way to give a toddler Xylitol was to make a list of what would classify a source as “good.”

-Easy and fast to consume
For Xylitol to be effective for dental health it has to actually stay in your child’s mouth for more than 2 seconds. Xylitol is also highly toxic to dogs, so if you have fur-babies as well, you don’t want Xylitol options laying around the house. You want something that comes in flavors your toddler will like and is consumed quickly, but likewise isn’t a huge chore for you.

-Has a relatively high Xylitol dosage per serving

On that easy-for-you note, most of us parents have enough to worry about without trying to remember to give 16 some-odd doses of Xylitol a day. This would mean you’d want a Xylitol product with at least around 2 to 4 g per serving making for just 2 to 3 times a day.

In my book, if something is going to become a daily, long term part of our family’s routine, it needs to be budget friendly.

While they may not be aimed at use in toddlers in particular, there are a wealth of options as far as Xyltiol products. This is because in addition to being great for dental health, it also causes very little glycemic response and has about one third the calories of table sugar making it a popular choice for diabetics and dieters. 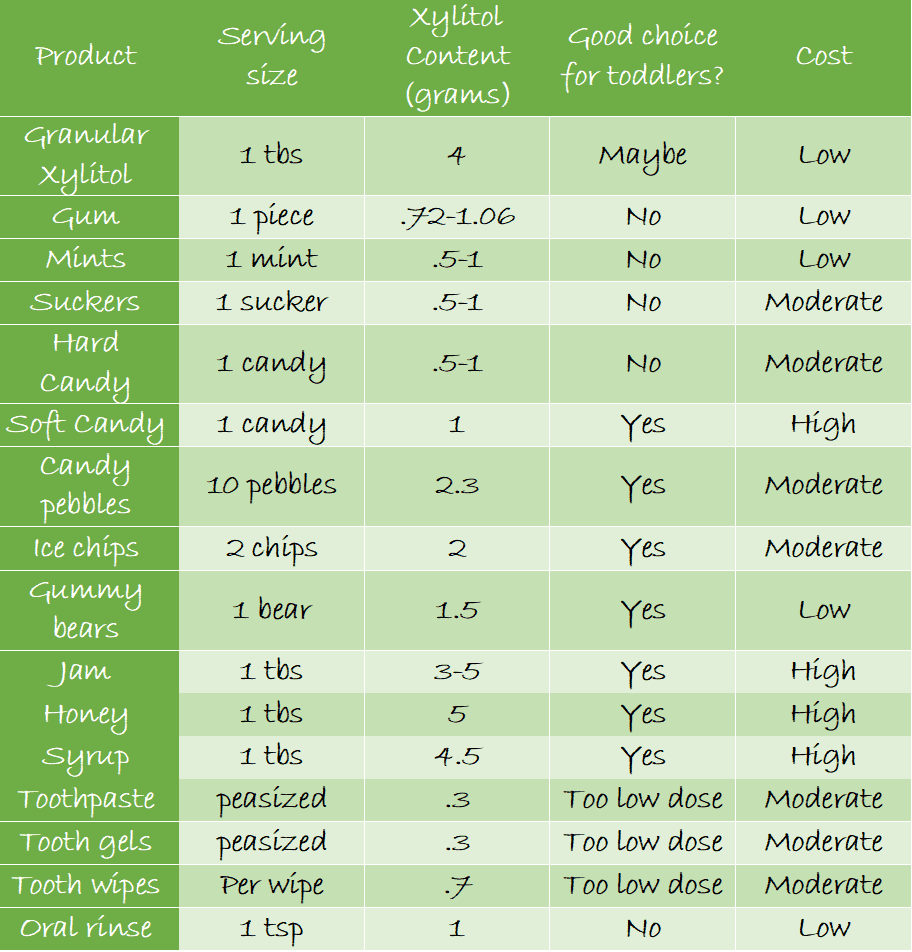 Often found either by the table sugar or in the health/organics section, granulated Xylitol looks just like regular sugar and has a similar taste. Given that, it can be used anywhere regular sugar would be. Keep in mind though that it is sweeter than regular sugar, so adjust down. Additionally, more than 45 g in children or 100 g in adults per day can cause intestinal upset (diarrhea is common). 1 tablespoon equates to about 4 grams, so it can add up quickly. Xylitol in this form is fairly affordable (about 3x the price of regular sugar in your area).

At first thought granular Xylitol seems a great choice for toddlers as far as dosage size, but there’s the issue that in most formats (such as used in baking or mixed into juice) it wouldn’t sit in the mouth long and dosage could vary (unfinished drinks anyone?)

The reason Xylitol gum is such a popular method of adding Xylitol to a dental routine is that it stays in the mouth longer than most other choices, despite a relatively low dosage (you’d need 6-10 sticks a day to get there). Gum is a poor choice for most toddlers not just because of that high frequency requirement, but because most toddlers quickly swallow or spit gum and may even choke.

Also popular with adults and also requiring many uses (6 to 20!), the flavor of Xylitol mints is often not well received by toddlers. They do make fruit-mint combos, but the mint flavor remains, because, well, it’s a mint.

Clearly aimed at kids, Xylitol suckers are another choice that sound good in theory, but fall short with more consideration. First, at .5 to 1 g per sucker depending on brand, you’d need at least 6 a day to hit the recommended dosage. Second, the sticks. As a parent, if you’ve done suckers with any regularity you know you find those stupid sticks all over, often with unfinished sucker attached. They may also pose a choking hazard depending on the kid, and at, on average, about .25 each, can get expensive.

Ditches the stick but poses the same issues as a sucker minus that.

Most of these are sort of like saltwater taffy or caramel, and would be fine for toddlers, though you would need about 6 per day.  It’s also important to pay attention to other ingredients. Try to avoid candies with other added sugars or where Xylitol is not high on the ingredient list (as grams per serving may vary by brand). Price wise on average you’re looking at around .25 to .50 per candy ($1.50 to $3.00 per day), less the more in bulk you purchase. Depending on age, they may also pose a choking hazard.

I deem them pebble candy, because that seemed a fair description. These are about half the size of a tic-tac and have a similar texture. About 10 of these pebbles is 2.3 g of Xylitol with a serving cost of about .15 each (.45 a day). Being small and easily chewed, they work fine for toddlers, and even come in a range of flavors.

These aren’t literal ice, they’re chips of flavored solidified xylitol chunks. They start off hard and sort of crunchy, but dissolve pretty quickly too.  They make a great choice for toddlers, though the varying sizes of candy can make it hard to get a precise dosage. The average piece is 1 g, with the packaging suggesting 2 chips per serving making for a minimum of 3 servings a day. Price wise, these run .10 to .15 per serving or .30 to .45 per day.

These are arguably something made for toddlers and have a decent dosage at 1.5 g per bear. The problem is that you will be hard pressed to find Xylitol gummy bears that don’t also contain other sweeteners. The most common is Maltitol, which for many folks causes watery bowel movements. Some people also tolerate them just fine in moderation, and at about $10 per 1 lb bag (.10 per serving or .30 a day) they certainly are an affordable option, so may be worth a test run.

While obviously mixed with natural sugars, these are options most toddlers will consume. The only downside beyond that would be that none of the above are something that’s chewed or sits in the mouth long. Purchased from the store, all three are also relatively expensive. Xylitol jam is .40 or so per serving,  Xylitol honey .43, and Xylitol syrup .55. Each would require two servings daily. At least in the case of jam, you may be able to make your own and cut costs a bit with granular Xylitol and fresh fruit.

While wipes are an easy way to cleanse baby gums, toothpastes, gels, and wipes are all an inefficient way to add Xylitol to a toddler’s diet. This is because, as mentioned, even high-percentage options would contain about .3 g per use. You would have to brush your toddler’s teeth 20 times a day to make the minimum recommendation. Often priced at around $1 to $2 an ounce, Xylitol toothpaste is also double to triple the price of your typical toddler paste.

At 1 g per tsp (a standard rinse cap holds roughly 2 tablespoons which is ~6 tsp or 6g Xylitol) oral rinses are a great option for older kids, but most toddlers likely won’t get the concept of swish and rinse, and oral rinses are not designed to be swallowed consistently. Xylitol rinses are also, again, fairly spendy at .50 to .80 per ounce (2 tablespoons) as compared to your standard mouth wash which runs closer to .25 per ounce.

So, TLDR, what’s the best way to add Xylitol to a toddler’s dental routine?

Based on price and ease of use, your top options would be Xylitol gummy bears (watch for adverse effects), ice chips, or pebble candies.