I’ve been called a softy in the discipline realm quite a few times, but it still continually surprises me how one parent can define discipline vs another’s abuse and vice versa. Toddlers being so defiant, stubborn, and a bit developmentally prone to be slow to pick up the rules, seem to be a major target for abusive punishments. So, if you ask me, as a mom of four who exemplify the word “gremlin,” what is the difference between discipline and abuse? 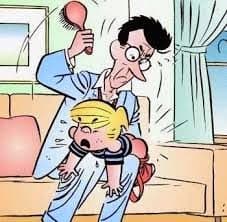 Lasting marks
Any form of discipline that leaves lasting marks is abuse. I don’t care if you hit your child with your hand or a firm pillow, if there was a mark that doesn’t quickly fade it was abuse. I’m not anti-spanking. I do spank my toddlers in cases of extreme danger and importance. Sometimes they even have a little red mark afterwards thanks to some seriously pale skin, but those marks are never still there within 10 minutes. Beyond lasting marks, if it could cause any injury what-so-ever, it is abuse.

Risk of death
I also support creative punishment. I’m a punishment-fits-the-crime sort of mom. I go easy on that type of stuff at the moment, because toddlers don’t often grasp the lesson, but as they get older, heck yes. However, there is a big difference between creative and abusive. If your “creative” punishment holds a risk of death to your child, it is abuse, not discipline, no matter what you called it.

Emotionally harmful
Finally, if it’s used for soldiers, don’t use it on your child, please. Your child is not an adult preparing to go to war. Things like cold showers have no logical place in disciplining a child. For a punishment to fit the crime, it must also have some logical tie to the behavior. Choosing random things like 50 laps for not picking up your toys doesn’t fit the crime. I realize that my final category seems broad. Many may argue a simple slap on the rump can cause “emotional” harm. What I would suggest is putting yourself in that child’s shoes. If as a child what you are about to do would stick in your mind and have a negative emotional effect on you, don’t do it to your child, whether it actually was done to you or not. Also keep in mind that your words can often hurt more than you know-watch what you say while disciplining your child. Always focus on the act, not the child.