I didn’t do anything wrong caring for my daughter’s teeth. I brushed and flossed her teeth regularly. She didn’t sleep with a bottle. She was transitioned to a sippy cup before she was even 2. Yet, unlike her three brothers who had and have healthy teeth, she had severe decay and cavities in her baby front teeth by the time she was 3. It resembled baby bottle tooth decay.

Working with her dentist, we tried to reverse the damage—mineral-fluoride paste (MI Paste), diet changes, even xylitol, but they kept getting worse anyway. When the first tooth chipped, I felt horrible knowing they would probably have to be pulled.

Unfortunately, I was right. She had to have all four of her top front teeth extracted. After her procedure, I was surprised to find how little information was floating aboutonline on the healing process and tooth extraction recovery in kids. I decided to build this page as a result.

Thankfully, a fair amount of extractions in kids are baby teeth. The tooth extraction healing process after the removal of a baby tooth is faster than it is for adult teeth, because the wound is smaller.

Immediately after removal, a clot will begin to form in the empty socket.

Your dentist may have also packed the wound with gelfoam. This is often used because children aren’t the greatest about biting down on gauze the way an adult would, but it serves the same purpose—to absorb and slow initial bleeding.

Gelfoam is white in color, so if you look in your child’s mouth and it almost looks like you can see bone or the remainder of a tooth in the socket, this is what you’re actually seeing. The image below is an example of this. It frequently falls out within a day. In fact, your child may even spit it out shortly after the procedure.

Once the gelfoam is gone, the extraction wound will just look like a hole in your child’s gum. It may continue to weep blood lightly in the first 24 hours. For instance, you may see a little blood on your child’s pillow when they wake up. However, for the most part, bleeding will stop within a few hours of the procedure.

Common complaints the first 24 hours after tooth extraction in kids:

Some of these issues are likely a result of the procedure itself, rather than the tooth removal, such as sore throat and cough. All of the above are considered normal and not cause for concern with the exception of bleeding that is heavy and fevers that are over 101 F. In either of those cases, you should contact your provider.

Things to avoid in the first 24 hours:

While a clot is establishing in your child’s wound, you should do your best to help them avoid:

Within a three days after a kid’s tooth extraction:

Mouth wounds heal very quickly. As early as 12 hours after the extraction you may notice the gum tissue is beginning to heal. By day three most parents can see a clear difference in the size of the wound site (the “hole” is smaller). Typical complaints (mentioned above) also begin to decrease.

Once again, expressed by percent of children experiencing each (on day 3 in this case):

Within two weeks after a kid’s tooth extraction:

In most cases by day 14 or so, the gum holes have sealed over completely, though occasionally this can take up to a month. A longer time frame is more common in molars and older children (with larger teeth).

You’ll still see an indention of sorts in the gum where the tooth was as bone hasn’t yet mineralized in the socket. This indentation will become less noticeable as time passes with significant bone formation being complete within 6 to 8 weeks.

What to feed kids after a tooth extraction?

You want to stick to soft, non-acidic foods that are unlikely to get stuck in the extraction wound. If the extraction was a front tooth, you also want to cut foods small so that your child can easily chew (or more like mush in this case) them with their back teeth only. You’ll find a list of ideas below.

Side note, if you can, try to get your child to swish some water after meals as well. In the case of toddlers, offering water to drink may be the best you can do there.

Some great foods for after tooth extraction include:

Once the extraction holes have mostly closed, rice and softer baked goods are also OK, such as bread (without a crispy crust) and soft-top cookies. With front-teeth extractions, again you may still have to cut these into small enough pieces your child doesn’t have to bite chunks off so to speak. This can make things like peanut butter and jelly or tuna sandwich squares, waffles, or pancakes an option (things most kids are a fan of).

When will my child’s tooth or teeth grow back after an extraction?

Finally, at least in my case, I was really wondering when my daughter’s front teeth would grow back in. Obviously, this question only relates to baby teeth, as permanent teeth don’t grow back.

Many of the online eruption charts for permanent teeth such as the one shown below are giving an average range. You may find that your child falls outside of this. For instance, my first son got his first front permanent tooth at 5 years old, while most charts state this happens at age 6 to 7. Teeth eruption patterns are largely genetic and vary from child to child.

However, a study published in the Journal of Dental Research in 2015 did find that permanent tooth eruption was tied to baby teeth eruption. So, if your child was an early teether, they may likewise get their permanent teeth faster. The same holds true for late teethers. Girls also tend to erupt teeth earlier than boys. 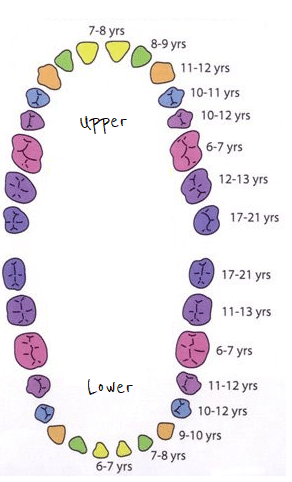