My youngest son will come and sweetly kiss your nose, and then whack you in the face, giggle and do it again. He thinks hair pulling, yours or his, is hilarious. He head butts things for fun. He bites when you hug him. It certainly isn’t an indication he loves you any less. His older brother mastered the arm-bar wrestling move before he was 2 years old. Neither child is ever free of at least one bruise, bump, or scratch. I have little boys, perfectly normal, endlessly rowdy, rough-and-tumble, little boys, and I wouldn’t have it any other way. Unfortunately, sometimes rough housing goes too far, and someone really gets hurt. Even regular rowdy needs regulation. 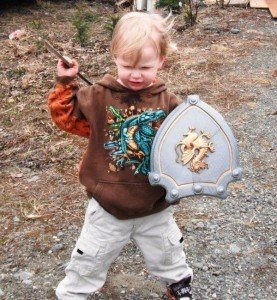 How can you tell regular toddler rough housing from unwanted aggression?

While aggression in toddlers isn’t abnormal, and is actually a sign of normal healthy development, it isn’t good when rough play turns into actual aggressive violence. As a parent, this makes it important to be able to tell the difference, so when your child isn’t just playing, you can act. Unfortunately, it’s hard to put into words how to tell violence from play. There isn’t just a list of signs to watch for someplace out there that you can catalog in your mind. Generally, over time, you’ll begin to notice certain traits or tics that show your child is escalating from play to anger. One of my sons, for example, will stick his tongue out and bite it when his intentions aren’t playful anymore. Naturally, if someone gets hurt, or if anyone involved is no longer having fun, it’s not a game anymore and it should stop.

How can you keep toddler rough housing all in good fun?

First, let the rules be known and stick to them. The most important thing with allowing rough-housing is to be clear on what is, and isn’t, OK. Just like with any other rule you present to your toddler, it may take time, but eventually they will learn and follow the rules if you are consistent with both punishment and praise. When your child does break a rule, let them see the natural consequence of their action coupled with your normal disciplinary system. If they hurt someone, let them see that.

Second, watch for signs that things are getting out of hand. It can help to turn settling down into a game of “freeze.” Anytime your child or children begin to get too excited yell, “freeze,” or “red light,” something to that effect that means, “stop!” By doing so you can reward listening, but also redirect attention to a new activity.

Lastly, introduce the idea of adaptability. What one parent sees as violence, may just be playing to another. What’s acceptable at home, may not be at school. Try to establish that rough play is for home only to help avoid complications.