You think trying to figure out what foods to eat on a diet is bad? Try being pregnant. This person says eat fish, this person says don’t touch it. Your brain says, “eat that entire tub of ice cream then have some jalapeno dip” and your stomach says, “please no!” You get conflicting information from every side—even the inside. So, what’s the real list of foods to avoid while pregnant? 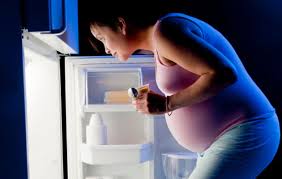 For the most part, the real list of foods to avoid during pregnancy is pretty short. Some wives tales have evolved out of common problem foods for certain folks, like spicy foods, but only a few foods are actually dangerous while pregnant. We’ll start off with a list of foods to avoid while pregnant, and then move into some that you may want to approach with caution as well as safe alternatives for foods you may be sad to skip.

Foods to avoid while pregnant:

Fish high in mercury:
The reason you often hear conflicting information on fish during pregnancy is that while fish is an exceptionally healthy lean protein (something recommended during pregnancy) a select few types of fish or seafood contain high levels of mercury. Mercury can cause nervous system damage if intake is excessive, but contrary to popular belief, only four types of fish land on the to avoid while pregnant list: tilefish, shark, swordfish, and King Mackerel. White albacore tuna should also be limited to no more than 6 oz. per week. All other seafood and fish options should not be eaten raw—so skip the sushi ladies.

Keep in mind that one serving of any of the above is very unlikely to cause any issue, so don’t have a heart attack if you had yourself a bit of swordfish—just don’t make it a weekly meal.

Safe alternative: Fish options that are low in mercury include salmon, shrimp, trout, cod, pollock, and catfish. It’s recommended you aim for 2 to 3 servings of fish a week.

Arguably, this could mean avoiding fast food, but in general, under-cooked, raw, or unpasteurized foods such as lunch meats, hotdogs, runny or raw eggs, and soft cheeses make the list of foods to avoid while pregnant. Be careful of foods that contain such ingredients, for example, homemade eggnog can contain raw egg. Your goal is to minimize your chances of getting food poisoning—not that anyone wants food poisoning—but pregnant women are at a higher risk of severe complications.

Safe alternative: You can eat all of the above as long as you either cook them thoroughly or choose a pasteurized option (whichever applies.)

I’m not sure most people would consider herbal drinks a “food,” but you’d be surprised how many just drinks in general contain herbal supplements. Think about drinks like Sobe, they almost always have an herbal component. In many cases, very little research has been done on the effects of certain herbs during pregnancy, so this is not to say they necessarily are foods to avoid while pregnant, but should be approached with caution.

Safe alternative: You should research any herbal-based products you wish to consume before trying them. Look for reputable sources with real research such as the American Pregnancy Association. You can find a list of the more common herbs in the linked source there, more rare options you may have to do some digging on, but if in doubt, avoid it. If research is not your forte, feel free to drop a comment on this page, and we’d be happy to look it up for you.

Another not-really-a-food addition to the list of foods to avoid while pregnant (hey, beer is like liquid bread right?), alcohol should be avoided during pregnancy. There’s been some back and forth on this topic, for example, back in 2012 a study found that moderate drinking during pregnancy was not harmful. However, studies on this topic are conflicting, and while there are women out there that have drank throughout their pregnancies have had perfectly healthy babies, there are others who had one drink and did not have such a happy outcome. Marijuana use during pregnancy is another questionable situation. To error on the side of caution, we here at Life at Gremlins encourage you to not drink or smoke marijuana while pregnant. All other non-prescription drugs should be avoided without question.

Safe alternative: Many of your favorite alcoholic drinks can be found in non-alcoholic alternatives. For example, you can make hot buttered rum using the mix and steamed milk, and the taste is very similar.

Finally, while not an avoid-completely substance while pregnant, caffeine intake should be limited to about 200 milligrams a day (an 8 oz. cup of your average coffee contains about 95 mg, a 12 oz. cola contains 33 mg, a 16 oz. Rockstar energy drink contains 160 mg plus herbal content for perspective.) Caffeine, like most things you consume, does pass through the placenta to your baby and can alter heart rate. Some research suggests that heavy use may also increase your risk of miscarriage.

And that’s it for foods to avoid while pregnant, surprised how short the list is? We were. If you have any further questions about the safety of consumption or use during pregnancy of certain things, feel free to add a comment or send us and email. We’re here to help.