As if disciplining a toddler isn’t tricky enough, they have to go and throw spaghetti at you– that’s a toddler’s curve ball, right? Sometimes it’s obvious that your toddler was just being a turd, did something he or she knew was wrong, and should get in trouble, but other times it’s a little less clean. For instance, what do you do if your toddler goes to throw a toy in the toy box, being a good kid picking up toys, misses, and hits a lamp? What do you do if you toddler tries to get some juice like a big kid trying to learn and spills juice everywhere? Disciplinary situations present in parenting, especially younger children, that are simply not black and white. So, how do you handle them? 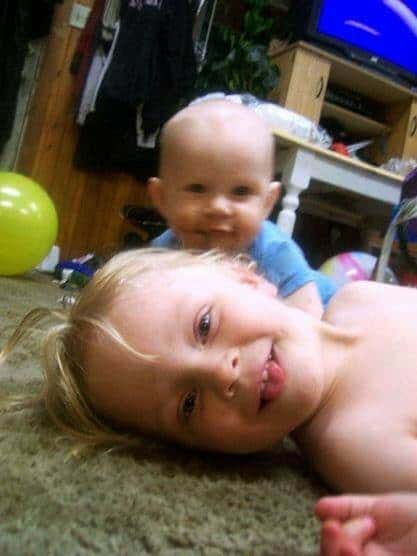 I know how easy it can be to lose your temper and just put your toddler in time out when you find mammoth mess, but the first thing you need to do is try to find out what happened. If your toddler’s verbal skills are adequate you can often just ask, while toddlers are also sometimes prone to fibs, you will at least get their perspective on what happened whether that perspective is accurate or not. If you toddler isn’t a great talker, you may have to piece the evidence together. For example, one day I came out of the bathroom to a gallon of juice on my couch, a tipped cup on the cushion, and a sobbing 2 year old. The evidence suggests he tried to get himself juice, spilled, and is upset. Sometimes a quick look around can provide the answers.

Once you think you’ve pieced together what happened, determine the motivation. Was your child intentionally breaking a rule, and if so why? Many parents forget that addressing the motivation behind bad behavior is almost as important as addressing the behavior itself. Otherwise, it’s like putting a pan under a ceiling leak without fixing the leak and expecting the floor to stay dry.

Decide on an appropriate punishment.

Finally, if a rule has been broken, punish that and then talk about the entire incident. In my juice example, he was punished for getting into the fridge by himself, because he’s well aware he’s not supposed to do so. He wasn’t punished for spilling the juice, which would have entailed him staying in time-out for the whole clean-up rather than a minute or two. We talked about him being a big boy and getting his own juice, as well as how now we had no juice to drink. After the incident, I often let him “help” poor the juice and have made an effort to give him more big-boy tasks. The rule broken was punished and the motivation was addressed, that’s your goal.

You may also find this full guide on toddler discipline techniques helpful.