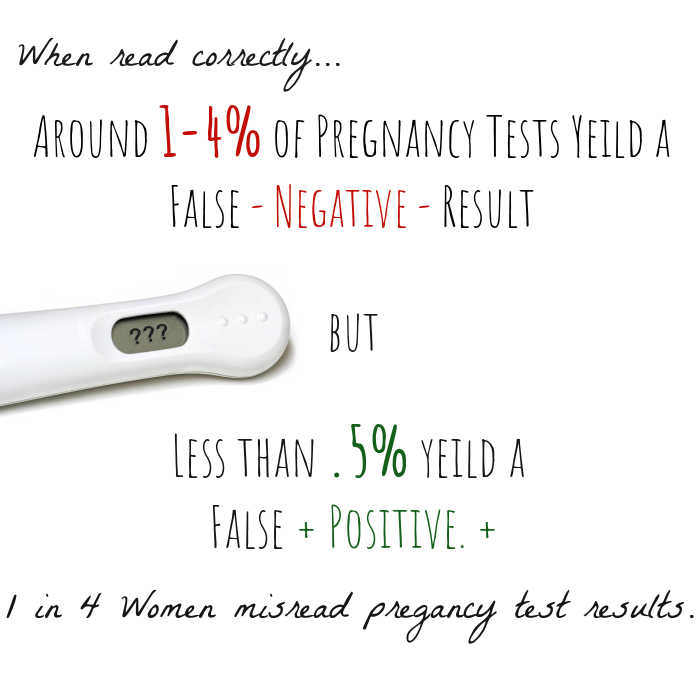 How do pregnancy tests work?

While a blood test can detect any level of hCG, most home urine tests have a threshold of about 20-25 mIU/mL. However, the most sensitive home test (First Response Early Result) can detect levels as low as 5.5 mIU/mL. Either way, these levels aren’t typically reached until 3 to 5 days after implantation. You can read more about when to take a pregnancy test for the most accurate results here.

How common is a false-negative pregnancy test result, and why do they happen?

For instance, a retrospective cohort study performed by researchers at the Boston University School of Medicine in 2021 found that among 10,924 urine hCG tests performed during emergency room visits, 1.6% yielded a false negative result. Rates were higher among women suffering from ectopic pregnancy (3.6%), a condition where a fertilized egg implants outside the uterus, such as in the fallopian tube or ovary, as hCG levels are typically lower than normal in these cases.

Keep in mind these rates were in a hospital setting with the instructions for completion and test results being read by a trained medical professional. There currently are no studies on the prevalence of false-negative results in the real world, but as you can imagine, they are likely much higher.

You may receive a false-negative pregnancy test result if:

If you think you may be pregnant or are experiencing symptoms of pregnancy and get a negative pregnancy test result, it’s best to test again in around a week. If the second test is negative, but symptoms persist (including missed periods), it’s time to consider seeing your healthcare provider. In the meantime, you might also find our page on missed periods with a negative test helpful.

How common are false-positive pregnancy test results, and why do they happen?

True false-positive pregnancy test results, meaning the test result is read properly, are far less common than false-negative results, but they can happen. As an example, in the substantial equivalence laboratory report for First Response’s Gold Digital Pregnancy Test, which included 575 tests, only .18% (a single test) yielded a false-positive result. These pregnancy tests feature an easy-to-read digital result screen that shows a plus sign and yes for positive results or minus sign and no for negative results. In the review, 98% of test-takers read their test result correctly, meaning the .18% is a fair representation of the prevalence of real false-positive test results.

You may receive a false-positive pregnancy test result if:

-You misread the result. Some tests will leave a very faint line as the urine passes the test indicator window that can appear to make the test positive. Tests that come back with very faint results should be re-done in a few days to a week.

-You got an evaporation line. Some tests, usually the cheaper variety, will show a “ghost line,” which is typically colorless or thin even if you are not pregnant. Reportedly among conception circles, this is more common in blue-dye tests. If you have to squint to see the line, test again in 48 hours.

-You waited too long to read the results. In most cases, an aged pregnancy test result will appear negative, but it is possible for a negative test to look positive after the recommended read time. This line is more likely to be colorless.

-You were pregnant but aren’t anymore. Even if a pregnancy fails within days of implantation, hCG is still produced. This is called a chemical pregnancy. Chemical pregnancies often present with no other symptoms, unlike a miscarriage, which typically comes with heavier bleeding and cramping at the least. Early pregnancy loss is common, occurring in roughly 1 in 4 pregnancies.

-You are taking a drug that contains hCG or causes analytical interference in hCG testing. A few select fertility medications, such as Pregnyl and Profasi, contain hCG, but a longer list of common medications can interfere with the accuracy of hCG testing, including anticonvulsants, like Carbamazepine, and antipsychotics, like Chlorpromazine and Thioridazine. Your pharmacist should be able to offer guidance as to whether any medications you’re taking could lead to inaccurate pregnancy test results. Note that birth control use can not cause a false positive.

-You have cancer or an ovarian cyst. Certain medical conditions, including gestational trophoblastic diseases (molar pregnancy), breast, ovarian, and lung cancer, and ovarian cysts, can release hCG, which could result in a false-positive test result. If you receive a positive pregnancy test, don’t wait to visit your health care provider, as these conditions, among others, such as ectopic pregnancy, can become life-threatening if left untreated.

-You are post-menopausal or just got a really sensitive test. Even women who aren’t pregnant have low levels of hCG. These levels are higher in some post-menopausal women, and the accuracy of pregnancy tests varies. In very rare cases, a test will read positive as a result of normal hCG levels in the body.

Can you trust home pregnancy tests?

A home pregnancy test is a good first step in determining if you are or aren’t pregnant if you miss a period or are experiencing other pregnancy symptoms. Keep in mind, though, they aren’t without fail, making them a better first step than last. When in doubt, see a health care provider, especially if what caused that doubt continues.

You may also find helpful:
Can you have a period and be pregnant?
Early Signs of Pregnancy Quiz
DIY Pregnancy Tests: Are They Accurate?