Let’s start out by getting this out of the way: no one can tell you whether you are or are not pregnant over the Internet. I can’t. A quiz can’t. Scrutinizing timing and symptoms can’t. The only way to confirm a pregnancy is in person via examination, urine, or blood testing. Regardless, I get a ton of comments asking, “could I be pregnant?,” “what are the chances of getting pregnant from…” or “am I pregnant?” So, that leaves us at what can I tell you?

Not interested in explanations and just want a quick answer? Click to jump to the Pregnancy Chances Calculation: Am I Pregnant Quiz below.

Am I pregnant? How do you know if you’re pregnant?

The first thing to consider when calculating your chances of getting pregnant is timing.

-Your last period
-The date of intercourse
If you know, the date of ovulation is also quite useful. You can find a full guide to pinpointing ovulation here.

Understanding when you can get pregnant helps a great deal in figuring out your chances of pregnancy. It is possible to become pregnant from intercourse at any time if you happen to be ovulating or ovulate while semen is still viable, but the chances are significantly higher during your fertile period. When is that? For most women, ovulation lands around mid-cycle. 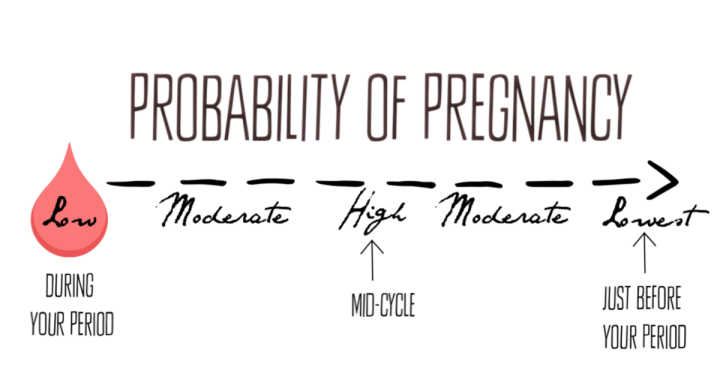 So, if your period is on average 28 days, ovulation is likely around the 14th day, with day 1 being the first day of period bleeding. Note I said most. Not all women ovulate mid-cycle, and ovulation does fluctuate slightly each cycle for some. You can help guess when you are ovulating by paying attention to vaginal discharge. When you are fertile, it will become more plentiful and watery. At ovulation itself, you may see egg-white-like discharge, sort of like clear snot (I know lovely imagery here.) There are also ovulation test strips you can buy if you are ttc, and basal body temping can also be a huge help.

Keep in mind that the egg is most viable in the first 12 hours, and though unlikely, may survive up to 48 hours. Sperm is most viable within 48 hours but can survive in the body for 5 or more days (studies differ on the subject).

Let’s consider some scenarios with that then.

Early intercourse: Can you get pregnant on your period?

The chances of getting pregnant are low with intercourse during your period, but not impossible—remember, if there is intercourse, pregnancy is always possible.

How can you get pregnant on your period? Well, because sperm can survive beyond that ideal 48-hour window, if you ovulate on the early side, it could still be around to catch the egg. It’s a scenario where the stars really have to align just right, so to speak.

Ex/ 26-day cycle, 6 days active bleeding, early ovulation at day 10. Intercourse on CD (cycle day) 5 during your period, sperm can still be viable at 5+ days when the egg drops.

This, obviously, also applies to the question, can you get pregnant right after your period as well, more so actually, because you are closer to mid-cycle.

Late intercourse: Can you get pregnant right before your period?

It would be nigh impossible to catch the following cycle’s egg this way if you are wondering. Why? Even if intercourse was on CD 26 just before your period began, with a low probability 5-day survival, you would still be looking at CD 5 for ovulation, which is very, very early, and questionably biologically possible.

Mid-cycle intercourse: poses the highest chances of getting pregnant

The closer to mid-cycle the intercourse is, the higher the chance of pregnancy. In general, because ovulation does fluctuate, anything after about CD 9 and about a week before the end of your cycle can be considered a fertile period.

It should be kept in mind that, on average, it takes a healthy couple 6 months to conceive, and it’s estimated that in a healthy couple under the age of 35, there is only a 25 percent chance of pregnancy with a single sexual act during a fertile time. Sex mid-cycle does not guarantee pregnancy. It just poses the highest chances of getting pregnant all cycle.

Side note, what if you don’t get periods?

Just because you aren’t having a menstrual period doesn’t necessarily mean you also aren’t ovulating. It’s entirely possible you just have very long cycles. Most women who don’t get periods do have occasional bleeding. Lack of menstruation can mean you aren’t ovulating, or it can mean you just aren’t doing so regularly. Either way, this is something you should speak with a care provider about, as it is often indicative of an underlying condition. If you’re ttc, that can greatly reduce your chances of getting pregnant.

Next, let’s talk about pregnancy symptoms.

I’m going to come right out and say you shouldn’t consider pregnancy symptoms at all, in my opinion. They are irrelevant this early, but then, I do have a quiz on early symptoms of pregnancy here, so why the hypocrisy there? You will not have pregnancy symptoms before you are pregnant. Period. This falls back into timing.

After sperm meets egg, it takes 6 to 12 days for that fertilized egg to find its way to the uterus and implant. It takes another 48 hours on average for pregnancy hormones to become high enough to even start to be detectable—that’s 8 to 14 days after fertilization, which could be up to 48 hours after ovulation. Until that egg implants, you aren’t pregnant. There are no pregnancy hormones. Your symptoms aren’t pregnancy-related. I have a pregnancy symptom quiz, yes, but with big warnings all over it that it applies after a missed period (which for most is about 14 days after ovulation).

You may now be thinking to yourself, puh, this lady don’t know Jack or his sister Sally’s ovaries, because I’ve had  pregnancy symptoms before a missed period before. The thing is, one of the major players in all those fun pregnancy side effects is progesterone, and progesterone is actually present in the body before pregnancy. Its production is super-charged by ovulation, and its purpose is to maintain a pregnancy. So, if you don’t get pregnant, it drops, and you get a period. If you do, it continues to rise. A high progesterone cycle will mimic the symptoms of pregnancy from nausea to gas.

Down to the details….

Next, look at the specifics. There are some common situations that decrease fertility and reduce the chances of getting pregnant, even if it’s mid-cycle.

I was on birth control when we had sex. Can I be pregnant?

No method of birth control outside of not having sex offers 100-percent protection. Most forms are pretty dependable if carried out properly, we’re talking in the 90ish percentile, but even if there was a condom or birth control, it is still possible to become pregnant. The chance is just very small.

What if the condom fell off, broke, or came off inside of me? Am I pregnant?

Condoms break, slip off, and sometimes even come off inside of women. In all the above cases, it is possible sperm escaped, and pregnancy could occur. Plan-B or the morning after pill is usually a good idea in this circumstance, as well, the chances of getting pregnant are a lot higher than if the condom had stayed on.

He pre-ejaculated without protection. Can that cause pregnancy?

Yes. Precum (the liquid that sometimes precedes a true ejaculation) does sometimes contain sperm and can result in pregnancy. A man has no control over pre-ejaculation. That’s why the pull-out method of birth control can fail, and a condom should not just be used for ejaculation but also during the entire sexual act if condoms are your primary source of birth control.

The chances of getting pregnant with precum alone are less than 4 percent (you can read an in-depth look at the chances of pregnancy from precum here).

In these types of situations, what matters is if there was semen involved and if it touched your vagina. Even if there is no penetration involved in the sex, if semen comes in contact with your vagina on fingers or any other object, pregnancy can occur. The chances, in this case, are, again, drastically decreased. If clothing was involved, the chance of pregnancy is even lower, nigh on nonexistent, but not impossible. If there was no semen or precum, there is no chance of pregnancy.

We had sex in water. Am I pregnant?

Sperm is destroyed rather quickly in water due to osmotic shock, so unless the ejaculation occurred within your body, chances are very slim you are pregnant. If the semen was inside of you, the sex being within water would have no effect on your chances of getting pregnant.

After you take all of the above into consideration, you should be able to calculate your own chances of getting pregnant—or being pregnant for that matter—to answer the question, “am I pregnant?” However, we’ve also created this convenient chances of pregnancy quiz to help you out. We’re fine-tuning this still, so if your situation isn’t covered or you have any suggestions, comments, or tips, feel free to drop us a comment. We love hearing from our readers!

Am I Pregnant Quiz

This “am I pregnant quiz” is designed to estimate your chances of pregnancy from no chance to high (not by percentage). The questions are conditional, meaning depending on your answers, your quiz length may vary from 1 to 9 questions. Keep in mind that a high or low chance of pregnancy doesn’t guarantee that there will or won’t be a pregnancy. Many couples trying to conceive try for months—or years even—and don’t become pregnant, and many other couples who are trying their best not to conceive (birth control, condoms, timing, all of it) do. Probability isn’t a promise, nor are these quiz results. This quiz is merely intended to provide a quick answer as to your likelihood of conception.

Have questions about your chances of getting pregnant? Still asking, “am I pregnant?” Drop me a comment or read in-depth about pregnancy probability statistics. Coming up next, when should you take a pregnancy test?

You may find riveting in the meantime:
Period While Pregnant: Can it Be?
Implantation Bleeding or Period: How do I know?
Late Period, Early Period, Irregular Period: Oh, why?
Early Pregnancy Symptoms